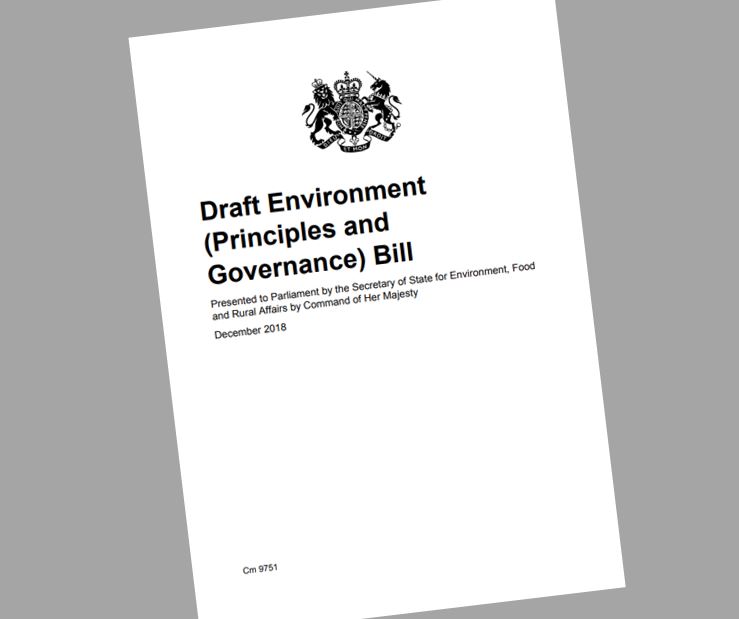 The Draft Environment (Principles and Governance) Bill sets out the main components of a framework for how environmental principles will be considered and environmental laws will be enforced. It marks a step in the right direction from government's thinking last summer, but many more are needed say Heather Gardner and Alastair Chisholm of CIWEM.

Leaving the European Union could (depending on the exact nature of our future relationship) have a major effect on how our environment is managed in the UK. Many of the measures which have protected our natural environment or reduced pollution in recent decades have stemmed from the EU, such as clean water and air directives.

When we leave, the UK government will be directly responsible for environmental law and policy for the first time in decades (regulatory equivalence associated with future trade agreements notwithstanding). This offers real opportunities to tailor the protection of our environment to our particular national needs. But it will also involve a real risk that powers previously held by the EU to enforce environmental compliance by member states may not be replaced in kind. This potentially puts at risk environmental progress made in recent decades unless a similarly empowered organisation is set up in the UK.

During the UK’s membership of EU, Europe’s institutions have provided a scrutiny and enforcement function on our implementation of environmental law. The European Commission (EC) acts as a vehicle for complaints by individuals over breaches of environmental law, which it can investigate. If it deems that there has been a breach of environmental law by a member state, it will issue a warning. If insufficient action is taken, the case is referred to the Court of Justice of the European Union (CJEU), which can issue a legal ruling including significant fines.

During the passage of the EU Withdrawal Act through Parliament, an amendment was added which required the inclusion of provisions for a new environmental watchdog and embedding of environmental principles into UK law, in a new Environment Bill. The intention being to replicate the functions of EU institutions.

Last summer, the government consulted on the environmental principles, how they should be transferred into UK law and which ones should be included, and what format the new environmental watchdog should take. A staggering 176,000 responses were submitted to the consultation, demonstrating just how important the public view this issue. The most common concern expressed was that the watchdog should have sufficient power and independence from government to properly enforce compliance with environmental law.

A new Environment Bill is ground breaking, the first such in over 20 years. Government claims as much:

"The Environment Bill will put environmental ambition and accountability at the very heart of government”, “create a new environment body to make sure that we succeed”, which “could take direct action to address the biggest environmental priorities of our age”.

The Bill requires the Secretary of State to prepare a policy statement on the environmental principles, such as the polluter pays principle and the precautionary principle and lay it before Parliament.

Government will be required to update the EIP every five years, and to set long-term targets for restoring nature. This will take a similar format to that of climate change reporting, with periodic progress reports to Parliament.

This is very welcome but, crucially, unlike the climate change targets, the targets in the EIPs will not be legally binding which has led to criticism. Government is now exploring how a legal framework for target setting and measurement might be set out in law, and work.

The new watchdog – the Office of Environmental Protection (OEP) is established by the Bill. This scrutiny and enforcement function has been the most anticipated provision of the new Bill. The replacement for the governance framework of the EC and CJEU is tasked with monitoring the implementation of environmental law, and required to act “objectively, impartially, proportionately and transparently”.

The OEP will also advise the government on changes to environmental law and any matters relating to the environment. The watchdog will have the power to issue information notices, decision notices, and most importantly be able to take any public authority to court over breaches of environmental law, marking a significant step forward from government’s original proposals last summer.

There is discussion now regarding whether the proposals for this legal enforcement process – presently set out as judicial review – would offer adequate access to justice for citizens with complaints or be appropriate for anything other than the most major of infringements. Some are proposing an environmental tribunal as a lower-tier enforcement option.

In prior engagement by environmental organisations on proposals for the watchdog, concern focused on two aspects in particular: Whether the body would be truly independent of government, then whether it would be able to replicate the authority of the CJEU and issue fines on government for environmental non-compliance.

Fairly predictably, the Bill fails to give the OEP the independence it needs. Along with many others, CIWEM advocated that the new watchdog should be funded by and report to Parliament, instead of government, in order to give it appropriate independence to investigate breaches of environmental law effectively. Moreover, it would only be in such a form that it could effectively wield the ultimate sanction and fine a government, or public bodies, for serious or repeated breaches of environmental laws.

The OEP will have the important power to be able to take public authorities as well as the government to court, as CIWEM called for, but it does not have the power to issue fines, which leaves us to wonder what the deterrent is to comply with environmental law.

Additionally, the OEP will be an instrument of government only. The Secretary of State for the Environment will appoint its Chair and non-executives and will also set its budget and pay (which must be “reasonably sufficient to enable the OEP to carry out its functions”).

Yes, the OEP as proposed is a common or garden non-departmental public body. It will effectively be a branch of government rather than an independent body, with its funding and remit at the mercy of current and future governments. Quite simply, this would not be effective. Without meaningful independence, OEP’s important work as a watchdog will be undermined, and environmental protections seriously weakened after we leave the EU.

According to the government, a body which is accountable to Parliament rather than the executive, and able to take enforcement action “would be inappropriate in constitutional terms and without precedent”. It also suggests that a body of parliament would be less transparent and subject to oversight than would an arms-length body of the executive.

This appears a flimsy justification; the absence of precedent is surely irrelevant. We are in pretty unprecedented times. For a start, no member state has ever left the European Union and its effective environmental enforcement mechanisms. Furthermore, no one has ever faced the scale and multitude of critical environmental challenges which exist in the modern world. We need something strong. Just because something directly comparable hasn’t gone before, what’s to say it’s not necessary, or possible, now?

Of course, precedent’s absence would mean that such a body would need greater care and consideration in its design and bedding in. But legal specialists in their advice to parliamentary pre-legislative scrutiny currently underway on the Bill have rebuffed the government’s claims that constitutionally it wouldn’t wash.

The legalese of the Bill also offers the government some important loopholes, in particular with regard to the environmental principles. The Bill wording states that Ministers of the Crown need only “have regard to” the policy statement when making decisions. The environmental principles will also not need to be applied when making decisions on public spending, or “any other matter” specified by government.

So, what is currently on the table is an ‘independent’ body fully funded and constituted by government, unable to levy fines and completely powerless against the short-term wax and wane of political priority, in defence of the long-term interest of society: It is working to principles which may be considered, but which can be disregarded whenever money is involved, or anything else which makes them remotely awkward to abide by.

The Environment Bill will be introduced in the Queen’s Speech in May, and the full draft of the Bill will be published early in the next Parliamentary session. Before then, the clauses pertaining to the principles and governance will have undergone their pre-legislative scrutiny. This process is currently casting a spotlight on the gaping holes in what could be another (like the Climate Change Act ten years ago) world-leading piece of environmental legislation. Right now, though, it’s far from it and its passage through Parliament later in the year is likely to be an enthralling one.

You can read the Draft Environment (Principles and Governance) Bill 2018, policy paper and impact statement here.

CIWEM submitted written evidence to the pre-legislative scrutiny inquiry on the Bill. You can read our response here.