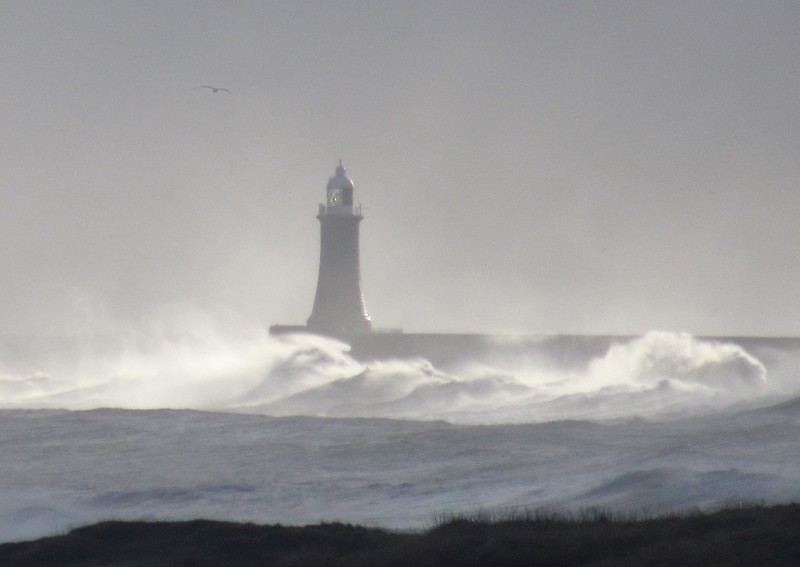 Climate change will have impacts on the UK’s coastline and surrounding seas that we are only starting to understand, writes Katherine Maltby.

We need to mitigate and manage the current effects of climate change, to avoid and minimise the worst impacts that we face. But adapting to climate change in future means we must also examine and anticipate the impacts that lie ahead.

Delving into these future scenarios helps us to predict how our marine environment could change by the end of this century. The report card presents some particularly worrying scenarios to show how climate change may impact the North Sea.

The North Sea, which separates the British Isles from northwest continental Europe, is a major shipping lane and fishing ground. The North Sea is critical to the UK, providing diverse habitats to an array of species as well as supporting its marine industries.

Because they are broad and shallow, the North Sea and wider northwest European Shelf Seas have large tides. But what makes the North Sea unique is that it is almost isolated from the Atlantic by a strong current and a steep continental shelf break. And so the oceanic water that makes it into the North Sea, from the north and via the English Channel, is particularly important.

These oceanic waters determine the North Sea’s unique water chemistry – the mix of waters, nutrients, algal abundance and productivity that supports the variety of habitats and species that we see there today.

Climate change is already affecting the North Sea and surrounding coasts. But we need to know so much more about how future climate change could affect circulation patterns of ocean waters across our shelf seas – and the implications this will have for the health of marine environment.

MCCIP’s latest projections indicate big changes in circulation patterns of oceanic waters by 2100, that could change conditions across the entire North Sea region. The predictions suggest a reduced inflow from the Atlantic Ocean through the northern waters between Scotland and Norway.

Less inflow from the north suggests that river inputs from the Rhine, the Elbe and the Thames will increase their influence, which is likely to make the North Sea less salty, too. Nutrient levels, such as nitrogen, could also increase as concentrations accumulate from these river basins.

One scenario suggests that by the end of the century, the North Sea may be more like an enclosed estuary than an open-shelf sea – creating the so-called North Sea Tipping Point.

But that’s just one forecast scenario. Wider projections suggest the North Sea will undergo many changes to its seas due to climate change. These include faster declines in oxygen levels than the global average and warming sea temperatures around 3°C.

So what impact would a much-changed – possibly estuarine – North Sea have on marine ecosystems and society?

Increasing nutrient levels can create eutrophication, favouring phytoplankton growth in certain areas and resulting in algal blooms. We already know that this is likely to increase under climate change, as warming sea temperatures encourage phytoplankton growth.

However, these blooms can be bad for marine wildlife and for humans. When algae blooms, oxygen levels can plummet. Starving many species of oxygen can lead to mass deaths of fish.

Some blooms are made up of toxic species that threaten human health. Indeed, data gathered over decades by the Continuous Plankton Recorder reveals that distributions of some harmful algal bloom species in the North Sea have already changed, with the harmful diatom Pseudo-nitzschia becoming more abundant in the northeast Atlantic. A swim in the sea may be a lot less inviting, come 2100.

Changes in circulation and a warmer, more estuary-like sea may also reshape marine ecosystems. These conditions may favour certain species that are typically associated with brackish waters, such as sprat, while reduced inflow has been linked to warmer summer temperatures in the North Sea and higher abundance of some squid species.

Some fish species such as hake and mackerel also shift their seasonal distributions with the changing conditions provided by the circulation patterns, and so the changes we expect could affect these movements.

Fluxes and flows of water into and out of the North Sea can act as a highway for many species, at different life stages. These flows transport the larvae of fish such as herring and cod into and out of the North Sea, helping to spread them from the spawning grounds to wider areas and nursery grounds. And so changes in circulation patterns could affect the recruitment of young fish into stocks targeted by fisheries in the area.

With oceanic waters losing influence to river waters, longer periods of flushing from rivers into the North Sea could lead to pollutants being retained in coastal areas. Retaining pollutants could lead in turn to bioaccumulation, which could have significant local impacts on biodiversity and humans.

Examining the relationships between climate impacts on marine systems, alongside other human pressures such as pollution, overexploitation and habitat loss is important, to determine how best to manage these systems to cope with future climate change and to make them more resilient.

At this stage, it is hard to say definitely whether – and to what extent – climate change will turn the North Sea into something more like an estuary, let alone to calculate the ecological and societal impacts of such a change.

But as uncertain as these impacts are, the North Sea is likely to look and feel very different in 2100. We already see evidence of many changes in this shelf sea region that will have major implications for both marine wildlife and humans. These changes – including warming temperatures, declining oxygen and salinity, acidifying waters and rising sea levels – are happening now, and will continue.

The added complexity of changing circulation will only exacerbate these alterations, but we need better projections to determine what the future holds for the North Sea, and for us. In the meantime, we must manage these present and expected impacts and develop adaptation strategies for marine wildlife and dependent communities to support this unique and productive marine environment cope with future climate change.

Dr Katherine Maltby is a marine climate change scientist at Cefas and works as part of the Secretariat for the Marine Climate Change Impacts Partnerships. For more information on the work of MCCIP, contact office@mccip.org.uk

How climate change is already reshaping the North Sea

MCCIP – a scorecard for the future of our seas

The UK Marine Climate Change Impacts Partnership (MCCIP) brings together scientists, government, its agencies and non-governmental organisations to co-ordinate information about climate-change impacts and adaptation around our coast and in our seas.

MCCIP collates and synthesises evidence on UK climate-change impacts and adaptation in a timely, impartial and independent manner, and disseminates this information in a series of focused report cards.

It published the latest of these in January, summarising the evidence from 26 scientific reviews that MCCIP had commissioned that cover the physical, ecological and societal impacts of climate change on UK coasts and seas.