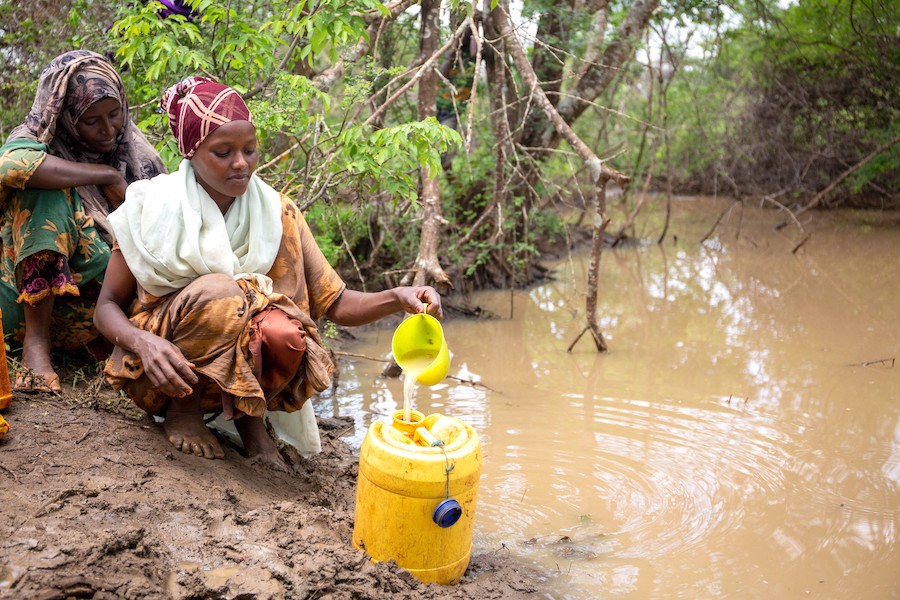 As world leaders convene in Sharm El-Sheikh, Egypt for COP27, this year’s devastatingly hot, dry Northern hemisphere summer should weigh on their minds.

The supposedly green and pleasant UK withered under record temperatures that brought drought to swathes of England. Europe’s summer proved yet again that the world is warming. Climate change – which at its core means water change – is bringing unprecedented weather patterns.

Europe’s heatwave dominated our headlines, yet WaterAid sees many similar situations every day – in communities living in poverty that don’t make the headlines. In these communities, infrastructure to deliver clean water is chronically underfunded. Commercial demand for water supply such as industry takes priority over people’s needs.

Imagine living and working in 40°C heat without running water, walking for hours to collect it, carrying the heavy load back, and repeating the journey that evening. This is how millions of people live, including in the Horn of Africa, now suffering its worst drought in 40 years. Nearly 12 million people in Ethiopia, Kenya and Somalia cannot access safe water.

The world is not running out of water. Research we published this year with the British Geological Survey found that most countries in Africa have enough groundwater reserves to withstand at least five years of drought. The challenge is getting water to those who need it most and ensuring a safe, reliable supply.

We need action now, as the impacts of climate change intensify, to ensure that the world’s most vulnerable people – who contribute least to climate change yet bear its brunt – adapt to its impacts. And that demands basic services like water. Communities also need decent sanitation, resilient to climate change. Without it, flooding and drought spread waterborne diseases and pollute the water supply and ecosystems.

Today, 771 million people live without basic access to clean water and are not resilient to climate shocks.

Many low-income countries have competing priorities and don’t have money to create sufficient, sustainable water infrastructures. Their geography – deserts, mountains and rainforests – can be challenging. They may lack water-management expertise. People in hard-to-reach areas can be forgotten, those living in poverty can be priced out and groups perceived to be different denied access.

Water inequality most affects women and girls, who shoulder the household chores and collect water, often from unsafe rivers and streams.

UNICEF estimates that women and girls spend 200 million hours collecting water every day. By the time Gifty, 16, reaches school after collecting water, lessons have finished. She and her classmates in Ghana’s Akamo community take turns to collect water. When the water they have collected runs out, “we can’t concentrate on the teaching and feel weak”, she says.

Gifty is one of millions of girls robbed of the right to education. Every day, women and girls are exposed to attacks and sexual violence as they travel to collect water or drop out of school for lack of toilets.

Water inequality has a profound impact on people’s health. Midwives and healthcare workers cannot wash their hands to deliver babies, exposing mothers to deadly infections such as sepsis.

Globally, one child aged under five dies every two minutes from diarrhoea after drinking dirty water.

Lacking access to clean water, one in ten people in the Global South is exposed to deadly waterborne diseases such as cholera. They have no choice. As Seido, 16, from Ethiopia, explains: “We don’t have any other option than walking for five hours to get water. The other water source is a river and it takes me about seven hours to get there.”

As world leaders gather in Egypt, they must think about girls like Seido. She and her community – and many others across the globe – need urgent investment. As little as US$1 per person of the world’s US$680 billion annual climate finance protects basic water services for poor communities affected by climate change.

WE-WE takes a locally led adaptation approach. Women train to operate and maintain water plants that remove salt and other contaminants to make the groundwater safe to drink. Cleaned water is distributed to community members. It’s affordable for disadvantaged households.

The water plants provided safe water during the Covid-19 pandemic. They have changed attitudes to women’s roles in rural communities, showing how women can play a vital role in local business and create wider social benefits. Gita Roy, an Assasuni water-plant president, won so much community respect that the local union elected her to represent it.

Women have gained skills in technical management, business management and book-keeping. They are supporting their families, providing a powerful foundation for their own and their communities’ futures. Tarulata from Dacope water plant says: “It has given us a new life of determination and confidence. Now, we can move forward to more options and empower ourselves.”

We also need solutions on a macro level. In 2020, WaterAid and a taskforce from the Prince of Wales’ Sustainable Markets Initiative launched the Resilient Water Accelerator.

Governments, the private sector, development banks, aid agencies, civil-society organisations and experts in environment, development, water and climate are building a pipeline of funded programmes for the most vulnerable communities. Working now in three countries, they aim to reach 50 million people in some of the world’s poorest, most climate-stressed communities, within a decade.

Many low-income countries lack data, technical expertise and finance to secure climate funding. The accelerator tackles these obstacles, helping the communities in most need to tap global climate finance. It martials experts to get data, working with the communities to design the programmes and secure businesses and international finance to support long-term environmental and financial sustainability.

Transformation won’t happen overnight. But investment from the Swedish International Development Agency, Bank of America and support from Arup, the Global Water Partnership, African Development Bank and the World Resources Institute is supporting progress in regions that face multiple water challenges. The governments of Bangladesh, Nigeria and Mozambique have approved engaging the UK and Dutch governments to build a coalition for action.

Pioneering projects like the accelerator will build up public and private investment to bring clean, dependable water services to those who most need it, helping them to protect themselves from the climate crisis’ devastating impacts and future threats such as pandemics.

Memories of that sticky UK summer have faded as winter sets in and as our energy bills soar. But climate change is here to stay. It is too late to reverse some of its worst impacts. Despite initiatives to help vulnerable communities to adapt, become resilient and address structural inequalities, we need urgent, adequate financing so that people don’t just survive but thrive.

We urge world leaders in Egypt to build on momentum from last year’s summit to deliver meaningful change, urgently. Rich-country governments must extend their COP26 commitments and more than double their financial support to developing countries.

They must prioritise clean water, sanitation and hygiene for the world’s most climate-vulnerable groups. And they must also put marginalised groups – including women and girls – first, tackling the structural inequalities that climate change exacerbates.

Only if we address these issues head-on will we get clean water to everyone everywhere and build communities that can withstand climate-change impacts. It is in all countries’ interests to deliver.