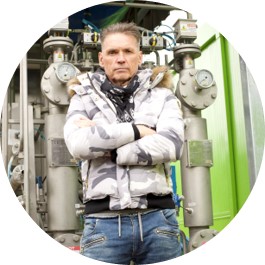 Once upon a time, a gentleman would propose marriage on bended knee, offering a ring that cost three months’ salary. Traditionally, that ring was set with diamonds, symbols of pure, enduring love.

Diamonds are certainly enduring, among the hardest materials on Earth. And cut diamonds are lovely, priced on carat, colour, clarity and cut. But a diamond’s reputation has lost lustre of late.

“De Beers’ marketing slogan was brilliant, alright,” he says. “We’ve come up with a better one: diamond mining is forever.”

To mine a one-carat diamond displaces 1,100 tonnes of soil and rocks, exposes 30 tonnes of toxic metals, emits 500kg of greenhouse gases and uses 5,000 litres of water, Vince says. If you imagined the impact of diamond mining in European terms, it would damage an area the size of Belgium annually, he says.

“And there’s nothing romantic about that.”

An ecowarrior and new-age traveller in his twenties, Vince made his millions founding renewable-energy giant Ecotricity. The profits bought him Forest Green Rovers, rebranded “the world’s greenest football club”.

The Second League Gloucester team’s New Lawns stadium is the world’s first carbon-neutral football ground. All food and drink sold is vegan – as are many of the players and supporters. Vince wants to replace New Lawns with a purpose-built 5,000-seater eight miles away, with office space and industrial units, built entirely from wood.

Still an ecowarrior at heart, Vince is battling carbon emissions on all fronts; energy, food, water treatment and consumer goods. Net zero’s holy grail is efficient, cost-effective carbon capture and storage. No country – no business – has delivered that.

“Ten years ago, I was thinking about geo-engineering to pull carbon out of our atmosphere,” Vince says. “Getting carbon out of the atmosphere is only half the job. We need to lock it away permanently.

“The most permanent form of carbon is a diamond. I thought, how amazing would it be to turn excess carbon-dioxide into diamonds? This started out as a carbon-capture and storage project; couldn’t businesses end each financial year, converting their annual carbon footprint into a sack of diamonds? What could they do with that?”

Sadly, the research and development found that a one-carat lab-grown diamond stores just grams of atmospheric carbon. Skydiamond is not the answer to large-scale carbon capture and storage. But what it can deliver, Vince says, is avoided carbon.

Skydiamond creates an alternative to environmentally damaging mining and uses renewables for the energy-intensive process it takes to make gems in a lab. “So what started as a carbon-capture project has become a carbon-avoidance project,” Vince says.

“Our process is carbon-negative – it’s the first industrial process certified to put air back into the atmosphere that is cleaner than the air we’ve taken out. And we’re making something people would love to own, from something we have too much of.”

It takes extreme heat or extreme pressure to make lab-grown diamonds. Baking a one-carat diamond uses the energy a household would use in a week. It took five years of research to make the process carbon-negative.

Skydiamond’s raw material is carbon dioxide, captured, liquefied and purified. Rainwater is split into hydrogen and oxygen using electrolysis, then fed to bacteria. This produces methane, which is mixed with hydrogen and placed in balls of plasma. The seeds are baked in diamond ovens, at 8,000˚C for two weeks.

After a couple of years fine-tuning quality, Skydiamond launched into retail before Christmas. The stones, which are physically and chemically identical to earth diamonds, have been certified by the International Gemological Institute. The gems are cut by artisans in Antwerp.

“The December list sold out in six hours and there’s a waiting list for the next drop,” Vince says. “We’ll announce our first designer collaboration in the spring.”

So far, he’s invested £5-6 million in the Gloucester-based production unit, which has produced around 500 carats of jewellery-calibre gemstones so far. It’s a tiny glint in a 150-million-carat-a-year global diamond market.

Vince hopes to break even this year. If the new stadium goes ahead, he wants to shift production there, ramping up to 1,000 carats a month.

Scaling up could lower costs. A Skydiamond costs about the same as mined diamonds. Mainstream lab-grown diamonds are between a quarter and a third cheaper than mined diamonds.

Vince may have tapped a trend. A year ago Pandora, the world’s largest jeweller, announced it is switching to lab-grown diamonds, halting sales of mined diamonds. Chief executive Alexander Lacik cited consumer concerns about ethical and environmental impacts.

The message has had an impact. Now the diamond miners are hitting back. The world’s seven largest – who hold three-quarters of the market – have launched the Natural Diamond Council to “advance the integrity of the modern jewellery industry”.

Vince doesn’t buy it. The environmental price of mined diamonds will always be too high, he says. “Just as people are campaigning to leave fossil fuels in the ground, we should also leave diamonds in the ground. Who needs mined diamonds now, when we can literally mine them from the sky?

“Nobody’s done this before. We plan to open a new market. People approach us, saying they would never have bought a diamond before, because of the impacts of earth mining – but they can now.

“It’s a big market to shift, 150 million carats, but it’s what we intend to do. The time has come for diamond mining to end. We no longer need to mine the earth when we can mine the sky.”