Holding back the waves: a plan for North Wales

Holding back the waves: a plan for North Wales 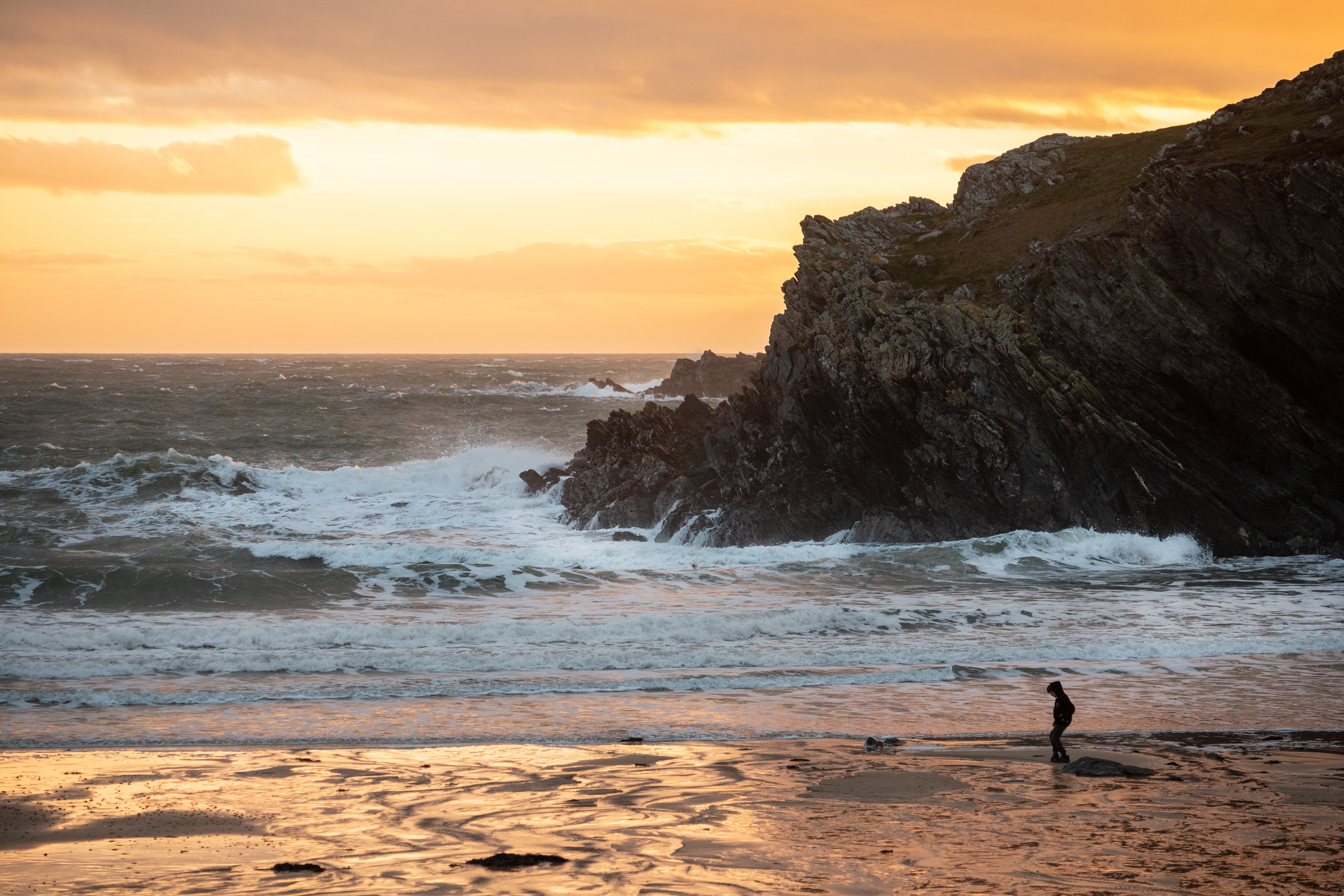 North Wales is vulnerable to flood risk – but the government also sees this deprived region as a priority area for new housing and economic development. How can Wales create new jobs and better housing while protecting its citizens from threats linked to climate change? Reagan Duff reports

FROM THE EPIC of Gilgamesh to Hopi tales of sailing into the Fourth World, many ancient cultures have flood myths, stories that pre-date the Neolithic era, that tell of communities lost to or born from rising seas.

In Wales, the legend of Cantre’r Gwaelod tells of a sunken kingdom beneath Cardigan Bay. This folk tale about a drowned world provides a cautionary tale for modern Wales. Today, 220,000 properties in Wales are at risk and 65,000 at significant risk of flooding from rivers or sea, a figure which will only increase as climate change brings heavier rain and stormier seas.

The North Wales coast, which supports tourism – earning £2.5 billion annually, one of the country’s largest industries – is particularly vulnerable. Sea-level rise will increase the threat of tidal flooding, expected to account for 70 per cent of flooding in Wales by 2080, up from half in 2002. Flooding already costs Wales more than £200 million a year.

The latest National Development Framework for Wales names the coast between Caernarfon and Deeside a key development region. The framework aims to develop northeast industry and services, to drive growth in North Wales.

The National Development Framework for Wales sets the country’s direction for development from 2020 to 2040, covering how to address the social, economic, political and environmental facets of development.

The framework does not aim to eliminate policy making, which creates tensions, but rather provides a basis for policy and informed decision making. The Framework aims to address issues and challenges “including energy supply, transport, the natural environment, housing and industrial development”.

It seeks to achieve sustainable development throughout Wales, balancing consideration for the environmental impacts of climate change against suitable and effective national planning policies. The government plans to revisit the framework every five years, altering and adding to it following new consultations.

Regional policy will be paramount across all decision making and policy implementation, based on understanding local opportunities and challenges. Designating the coastal areas from Caernarfon to Deeside should enhance holistic development.

The framework says this region will “play an important role within the region, providing jobs, leisure and retail, cultural opportunities, education, health and services”. It says regeneration, based on managed growth, will be key to achieving these goals.

Introducing the framework, First Minister Mark Drakeford notes that the government consulted the 2015 Wellbeing of Future Generations Act of 2015 in developing the framework, to create “another building block in making Wales a fair, green and prosperous place”.

Wales’ minister for housing and local government Julie James AM adds that the framework provides the foundation for an economy and a society that are resilient and sustainable. She highlights the role of regional development, with bespoke development strategies supporting local characteristics to underpin regions’ development.

But the northeast faces significant flood risk from its coastal location and rivers such as the Dee and the Clwyd. Vulnerable infrastructure here includes the North Wales Expressway and the coastal railway, both linking the UK to Ireland. Being designated a flood-risk area could hinder new infrastructure, stunting the region’s growth.

Any development that falls within Flood Zone C will need to factor in flood risk for planning decisions. That could create problems permitting developments within designated development zones; planning policy requires acknowledgement and mitigation of flood risk. It will cost more to build inside these flood zones, requiring additional flood risk and consequences assessments, mitigation measures, planning-application fees and other bureaucratic requirements.

The National Development Framework must factor flood risk into its planning policy to ensure that infrastructure supports resilient, sustainable development and does not put lives at risk. The framework sees these regions’ significant risk of flooding as a major challenge for regional development and regeneration. It seeks to co-ordinate strategic decisions on flood management and related investment.

Although this may not alter the original Tan 15 guidance, this could make it harder for developers and local councils to find suitable locations to develop to support the framework. Welsh government estimates suggest that North Wales will need 19,400 more homes by 2038. Given that so much of North Wales is exposed to flood risk, the country may struggle to meet that target.

Flood defences along the Welsh coastline protect 28 per cent of the coast and some £8 billion of assets. However, these defences have limited effectiveness in managing current risks of flooding and coastal erosion. The way climate change reshapes sea levels, precipitation and rates of coastal erosion will make these defences even less effective.

The Welsh government says it will struggle to build new defences due to constraints on – and competing demands for – public money. But if investment in managing flood risk continues at its present rate, the number of properties in Wales that face significant risk of flooding will increase by more than 75 per cent by 2035.

Funding would need to triple by then to protect the same number of properties from flooding. The figures highlight the scale of the challenge that Wales faces, even to maintain its flood-risk defences and in making existing infrastructure, businesses and communities resilient to climate change.

Wales has already done a lot to tackle flood risk in the north. The Flood and Coastal Erosion Management Programme has allocated £56 million to improve flood defences across Wales. It has identified where best to improve flood defences, including areas in North Wales, having taken a holistic approach to consider the likelihood and impact of flooding, the number of properties that will benefit and the ecological and recreation benefits.

Thanks to this programme, flood defences have been upgraded in Rhyl and Llandudno, which both lie within the coastal-development region. Rhyl’s £27.5 million flood defence comprises rock armour to raise the existing sea wall, protecting up to 1,650 homes.

There are other instances across North Wales where local councils have recognised that they need to improve their sea defences. Recent projects across Anglesey, Gwynedd, Denbighshire, Conwy and Flintshire aim to make the coastal region more robust.

These are the kinds of defences that will be vital if the Welsh government is to meet the additional 19,400 houses required to meet demand in North Wales by 2038 and an overall 114,000 homes across the whole of Wales.

North Wales is a deprived area; 51 per cent of new housing needs to be affordable – that’s 10,000 new homes by 2038. StatsWales lists 13,000 affordable housing submissions granted across Wales, but less than half delivered.

North Wales’ poorest communities are also most vulnerable to coastal flood risk. Areas within the designated development zones have official unemployment rates of 4.4 per cent, against a UK average of 3.9 per cent. The area has high levels of seasonal unemployment. More than quarter of people living in North Wales are over 65, indicating greater need for healthcare and transport. These communities need affordable, resilient new housing.

Last year, the Welsh government published its Draft National Strategy for Flood and Coastal Erosion Risk Management in Wales, for which the consultation period closed in September. The strategy aims to address flood risk across Wales through five main objectives:

All of this highlights the Welsh government’s determination to provide a well-researched, well-communicated approach to managing flood risk in Wales, that balances flood risk’s environmental demands against the country’s growth needs.

Forthcoming publications, including the Coastal Adaptation Guidance and the updated Tan 15, will identify how to manage flood risk within the development framework’s ambitions. All of this highlights the role flood risk plays in development planning.

As sea levels rise, and as storms become more frequent due to climate change, Wales will have to acknowledge and make more allowances for flood risk for its development plans to succeed.

Article by Reagan Duff in the March edition of The Environment