This spring wild swimmers, anglers and conservationists successfully pressed Defra to designate the Thames tributary Wolvercote Mill stream as bathing water – becoming only the second stretch of river to win that status in the UK. Karen Thomas travelled to Oxfordshire to find out what happens next 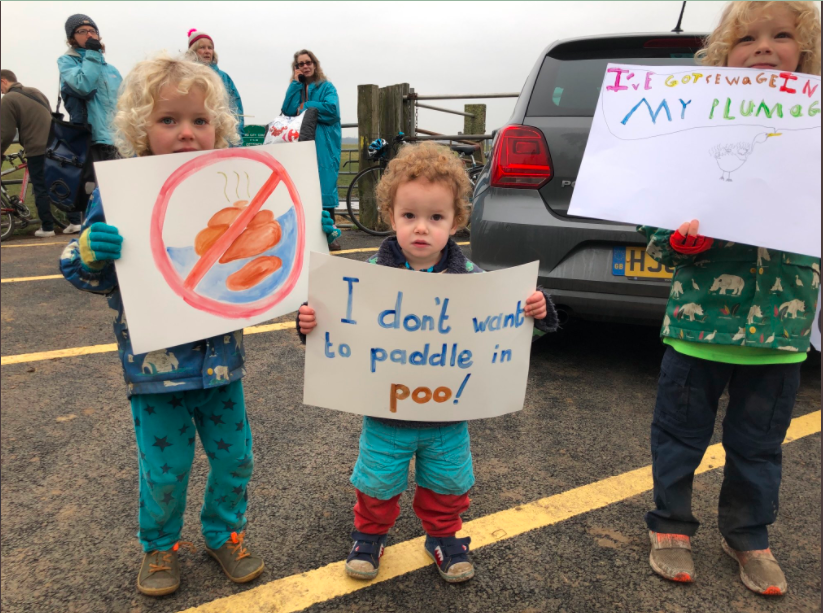 It’s the contrast that’s so striking, Claire Robertson says. Water quality in the river she swims swerves between good – even excellent – in dry months and levels of bacteria at least twice the levels that are safe when it rains.

The freshwater-quality PhD student, wild swimmer and Oxford Rivers Project officer knows this now having worked with fellow bathers and conservationists to test the waters of the upper Thames that flow through Oxford from the northwest.

In April determined testing and lobbying by local swimmers, conservationists, anglers and Oxford District Council paid off. Defra agreed to designate Wolvercote Mill stream as bathing water. This makes the popular bathing spot northwest of Oxford only the second stretch of UK river to win that status and to face much more rigorous testing for pollutants.

Securing that status requires Thames Water to monitor the river more closely. The activists will scrutinise that data as they continue to press the water firm to stop pumping treated and untreated waste through its combined sewer overflows (CSOs) into a tributary that joins the UK’s second-longest river.

So much rests on what happens next.

In blazing spring sunshine few places can be prettier than Wolvercote Mill stream, a chocolate-box cliché of pastoral England. The stream splits Port Meadow, the wide flood plain that Alfred the Great granted to Oxford’s freemen for holding off the marauding Danes.

The morning swimmers have been and gone. Dog walkers pick their way past the horses and through the huge flock of – slightly menacing – grey geese that grazes the river’s edge. “Nah, they’re perfectly harmless,” says ODC countryside supervisor Julian Cooper, the ranger for Port Meadow. “Although they do leave quite a mess.”

The meadow is common grazing land just as it was in 1089 in the Domesday Book. A couple of hundred cattle come out to pasture every summer, turning the soil and keeping scrub at bay.

Port Meadow floods in heavy rain, holding water back from the city centre, three miles downstream. “It saves Oxford millions of pounds every year in flood-damage claims,” Cooper says. “And it has European designation as a scheduled ancient historic monument.”

Uncultivated for 4,000 years, the sward is a winter refuge for waterfowl. It is one of the last habitats for apium repens, the endangered creeping marshwort. The flood plain has also drawn generations of pleasure seekers. Cooper points out faint markings from Victorian-era bathing huts. 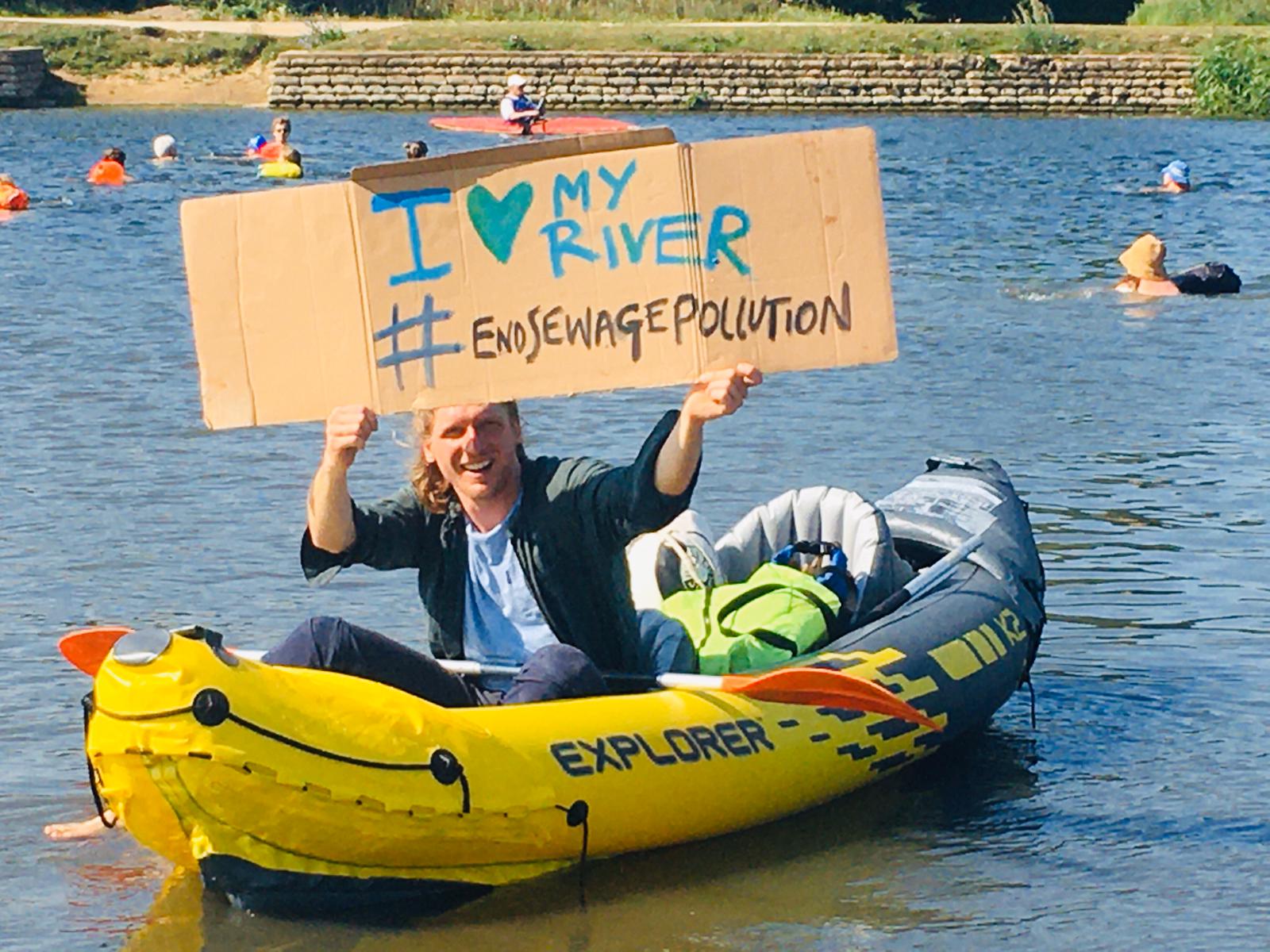 That wheel has come full circle. Oxford’s residents and students have always boated and picnicked on Wolvercote Mill. But growing recent interest in the benefits to health and wellbeing from wild swimming peaked during the pandemic.

During lockdown the stream became a lifeline for many residents – their destination during their permitted hour to exercise; to walk, to swim and to commune with nature. On hot summer days up to 400 people swim and paddle in the stream.

Robertson studies at Cardiff University. Her PhD uses environmental DNA to sample pond water quality. She lives in Oxford and has swum in its rivers for years with friends. But she never worried about what they were swimming in – or, more importantly, how little information they had about this – until July 2020.

That was when the Environment Agency published damning statistics that revealed how much sewage CSOs are pumping into England’s rivers. Public and press were outraged, including Robertson and the Oxford wild swimmers.

“A million and a half hours of sewage discharge,” she recalls. “It made me so angry – me and my friends. So we organised a floating protest and a hundred people turned up.”

One swimmer, a local councillor, knew about the successful bathing-water campaign on the River Wharfe at Ilkley in Yorkshire. She urged the Oxford river users to launch their own campaign for bathing-water status, pushing local authorities, regulator and Thames Water to monitor pollution from Cassington sewage-treatment works more closely and to post alerts when effluent is being pumped into the rivers.

“Back then, there were no sewage alerts at all for rivers,” Robertson recalls. “But to our surprise, Thames Water chief executive Sarah Bentley invited us to meet her. She was willing to fund some testing and to trial a notification system. Then the city council voted unanimously to go for bathing-water status so we had to make it happen.”

More than 1,200 people replied to Defra’s consultation. In April it granted bathing-water status to the stream and to East Cowes esplanade on the Isle of Wight. This means the Environment Agency will monitor and report on water quality at both sites during the bathing season, from mid-May to the end of September.

Oxford Rivers Project wants more information about early spills from Cassington – sewage discharges before the plant is at capacity. The sewage plant faces new pressures from Northern Gateway, a mixed housing and business development north of Oxford, Cooper says. Surface-water run-off from these new homes and businesses could add to pressures on Cassington.

Winning bathing-water status only gives swimmers better information about the nasties they will encounter, he says. “So many people think that winning designated bathing-water status means the water is clean. What it means is it’s more closely monitored. When the season ends we’ll have all the data to put out there. So swimmers can make an informed choice.”

Robertson and her fellow wild swimmers hit the water in all seasons. They are pressing the Environment Agency to monitor water quality all year round. They haven’t heard back. Cooper is urging city planning officials to fund a seasonal ranger to monitor water-quality changes, a system in place at Poole Harbour and the Thames Basin.

Meanwhile, Oxford Rivers Group has signed up a Masters student to monitor water quality above and below the Cassington outfalls.

The campaigners will use the data to press Thames Water to clean up its act. “The question is, will they spend money to improve matters,” says Robertson. “It’s all very well having better testing; what we need is upgraded infrastructure. Thames Water has pledged to halve its raw-sewage discharges by 2030 – let’s see.”

Cooper agrees. “My other concern is that the water companies will focus on tackling the high-profile cases. There’s a danger that focusing on us means we’ll see a drop in monitored and reported sewage discharges elsewhere.

“There’s no monitoring at all on 99.9 per cent of UK watercourses. And the EA said only recently that it will focus enforcement action only on major incidents. Incidents in smaller tributaries that the agency perceives to be small can have massive impacts on fish and other wildlife.”

The breakthrough at Watercote Mill is bittersweet for other river groups who’ve fought longer and with less success to press agencies, water companies and local authorities to tackle pollution. It falls to local volunteers to fill the gaps in water testing and report incidents to authorities who say they are busy, who may not want to hear about it.

But something has shifted in people’s relationship with their rivers post-pandemic. Pressure for change is building, from the George Monbiot-fronted film Rivercide to Surfers Against Sewage pushing to test river-water quality and to support local campaigns. The demand for change is now deafening. But how did a new river group breakthrough so fast?

“What makes these campaigns interesting,” Cooper concludes, “is that no one can argue against them. Dumping sewage in rivers in the 21st century? We’re not living in Dickensian times; no one except the water companies thinks this is a good idea.

“So they struggle to defend something that unites environmentalists, anglers, canoeists – even landowners. Everyone is buying into it. How many campaigns can do that?”