What can folk tales and ancient stories of flood and changing coastlines teach us about the future impacts of rising seas? Everything, argues climate scientist Patrick Nunn 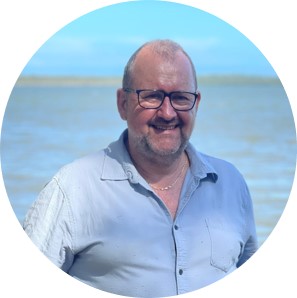 Many of you reading this probably grew up as I did, absorbed in the myths and legends that abound in northwest Europe, eventually learning to keep them at arm’s length. A bit of fun, diverting for children, but nothing anyone should take seriously.

But then where did these stories come from? If there is no monster in Loch Ness, how did the tradition arise? If mermaids don’t exist, then why are there countless accounts of their sightings in the tales of our ancestors?

Seemingly plausible accounts like that of 19th-century Scots geologist Hugh Miller who recalled that for 30 years the people of Cromarty nightly saw a mermaid “sitting on a stone in the sea, a little to the east of the town” singing and braiding her long hair.

And why does almost every culture in the British Isles – and far beyond – have stories about giants who strode across land and sea? Were our ancestors uncommonly imaginative, ever ready to spin a fireside yarn … or is it possible these kinds of stories represent something else altogether?

I incline to the latter.

Around 20,000 years ago, the Earth was in the grip of the last great ice age. Ice sheets smothered the land, especially in Asia and North America and of course Scandinavia and Scotland.

The Irish Sea was a vast ice sheet, sitting directly on the ocean floor. Around the southern margins of this ice sheet, the land was continuous from the south of Ireland through Devon and Cornwall all the way to what we now call France.

In the aftermath of the ice age, as the land ice melted, herds of animals such as aurochs – the ancestors of modern cattle – and mammoth moved across this land, followed by predatory groups of humans, who reached almost all parts of the British Isles before the ice disappeared.

During the last ice age, the ocean surface was about 120m lower than today. That much ocean water was extracted to build the land-ice sheets. But when these melted after the ice age ended, the ocean surface rose, gradually flooding the lands that had been exposed.

The English Channel, a broad river valley during the ice age, was gradually inundated, severing dry-land connections between mainland Europe and England and Ireland. The Irish Sea formed, so that people wishing to cross it now had to get in a boat, not walk.

What do we know of the effects of this 120-metre rise of sea level on the people of this land? Modern science teaches us the bare bones – when islands became islands, when people first reached them – but do we know anything about what people thought about what was happening?

Perhaps we have been looking in the wrong places.

In The Mabinogion, a 12th-century compilation of Welsh oral traditions, we learn of Brân, a giant who strode across the Irish Sea to rescue his sister from her miserable marriage. The seventh century Fenian Cycle tells of another giant, Fionn mac Cumhaill – Finn McCool – who made a path from County Antrim across the sea to western Scotland to confront his Scottish counterpart.

How did these stories come about? Did people dream of giants perhaps – or did they simply infer they had once existed?

Well, imagine a time several thousand years ago when people remembered how their ancestors walked between Ireland and Wales/Scotland, the lower sea level making this possible.

The memory was so strong that these stories were retold year after year, generation after generation. Until that day when the audience grew sceptical.

“Come on, Grandma”, you can hear someone say, “Surely you don’t expect us to believe that someone once walked across there”, pointing to the 60km ocean gap that covered old King Brân’s route.

So the storytellers became creative. To make the ancient story believable, Brân had to become a giant, so large that he could step across such an ocean gap.

But not all such stories require giants. The 16th-century Cornish antiquarian William Borlase collected so many traditions about the sunken land of Lyonesse, somewhere between Land’s End and the Scilly Isles, that he devoted much of his life to demonstrating they were rooted in fact, when consensus regarded it as legend.

I love the quip of the archaeologist Osbert Crawford, who in 1927 asked rhetorically whether the story of Lyonesse had “any real basis in fact, or is it merely an invention of the dreamy Celt?”

Then – and since – most people have regarded the Lyonesse stories as inventions of “dreamy Celts”. Crawford disagreed. He thought stories of Lyonesse originated in what today we call the Scilly Isles when most of these were a single large island, which was indeed the case 7,000 years ago.

Then the ocean rose, dismembering this island, an event etched into the memories of people living there. Their descendants inherited this story, telling it over and over, generation after generation, eventually reaching us today.

Literate people tend to scoff at the notion that a group of people, unable to read or write, could retain memories of events thousands of years earlier. That is just bias. I term it the arrogance of literacy.

There is no barrier to interpreting the Lyonesse stories as memories of the inundation of the Scilly Isles. People lived there 7,000 years ago. The ocean rose, transforming one large island into many, no doubt traumatising the inhabitants.

And crucially in support of this interpretation, it has been demonstrated that oral – ie, pre-literate – societies have passed down knowledge to successive generations for thousands of years.

The best-documented examples come from Australia, populated by peoples who arrived there some 70,000 years ago and remained largely isolated. With this unmatched cultural continuity, there is clearly an opportunity to evaluate Indigenous stories, to see where the edge of memory lies.

In at least 27 places all along the Australian coast, groups of stories have been collected that recall a time when the sea surface was lower, coasts further out to sea, and what are now islands were part of the mainland.

And, since the sea surface reached its present level about 7,000 years ago around Australia, all these stories must be at least this old. Some are calculated to be more than 10,000 years old, stories like those of the Indigenous peoples of the Great Barrier Reef coast who tell of times when the entire reef was dry land, part of the mainland.

To many of the storytellers, the preservation of these recollections is not remarkable. To most of the rest of us, it is incredible; people have preserved their observations of profound landscape-altering events for thousands and thousands of years in intelligible form. 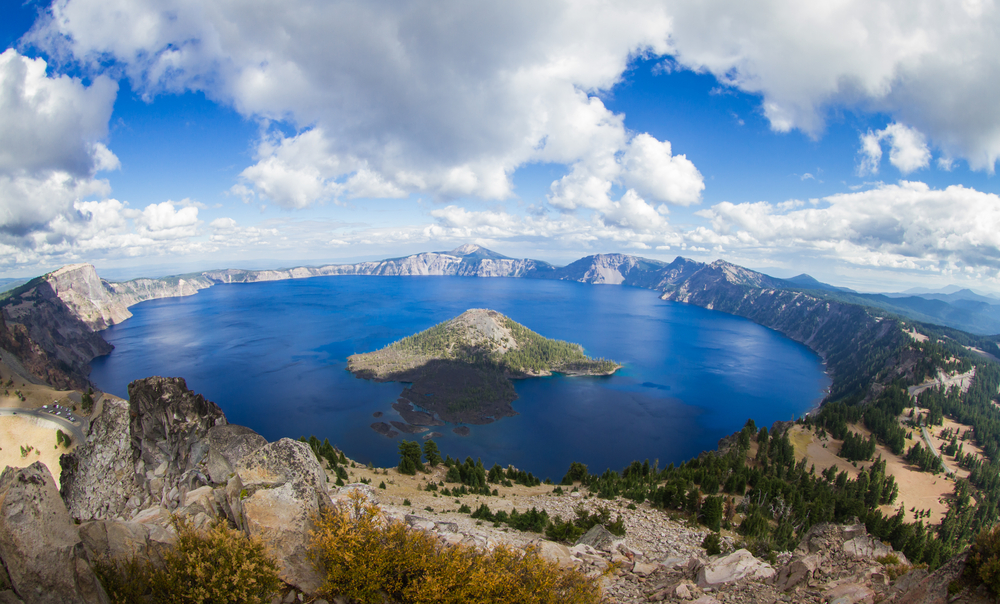 But it is not just rising sea levels and accompanying land loss that are so well preserved in ancient stories – or myths and legends as we sometimes unthinkingly label them. Consider other memorable events like meteorite falls, giant waves and volcanic eruptions.

One of the most stunning sights in the western US is Crater Lake in Oregon (pictured above), which geologists know as the caldera formed when the massive stratovolcano Mt Mazama collapsed during its terminal eruption 7,600 years ago.

When the first Europeans reached this area a few hundred years back, the Klamath peoples of the area told them about a fight between two gods, the good one pulling down the volcano to bury the evil one beneath Crater Lake, an unquestionable memory of the 7,600-year-old eruption.

Think about it. Today many people express their growing anxiety about future climate change and how this will constrain the way people live. But go back 7,000 years and consider that most of the world’s coastal-dwelling peoples had to absorb the effects of several millennia of rising sea level and coastal land loss.

Along many coasts of northwest Europe, the sea level has been rising ever since, yearly cutting into the fringes of the land, periodically overrunning farms and towns, sometimes even cities, displacing vast numbers of people; climate migrants.

These were no less despairing than those of today, driven off the land their ancestors occupied by the fact of it becoming uninhabitable: a situation that will become far more common within decades.

Some expressed anxiety, fearing the ocean would submerge the entire landmass. Others adjudged the sea an aggressor, rolling red-hot rocks into it. Others built sea defences to try and halt its encroachment, just as today we build sea walls.

Complementing physical responses to rising sea levels in the distant past were spiritual ones, reflecting the world views of affected peoples. Some involved appeals to the gods to stop the ocean rise; many megalithic sites near coasts may have been created for this purpose.

French archaeologists argue that the famous megalithic stone lines at Carnac in Brittany were raised about 6,300 years ago to form a cognitive barrier, to stop divine interference with the material world.

Similar functions have been attributed to other such constructions, such as the “symbolic weir or dam” at Flag Fen near Peterborough which may have been a spiritual defence against the rise of the ocean across the English Fenland several thousand years ago.

Ancestors of those of us in northwest Europe also sometimes buried valuables in symbolic lines along the coast, perhaps as an offering to stop the ocean’s apparently inexorable rise.

Examples include the systematic arrangements of flint tools alongside the skulls of aurochs at Hoge Vaart wetland in the Netherlands and ship burials of high-status individuals. At Sutton Hoo, the Saxon monarch King Raedwald was buried with everything he would need in the afterlife, close to the ocean where his soul was destined to travel.

All this knowledge about the past is more than merely interesting. It has practical uses. Our ancestors’ encounters with ocean-level rise and loss of coastal land are not that different to our own.

We occupy a changing world in which the ocean is rising and is likely to continue to do so for a hundred years or more. Our concerns with stopping this process through short-term adaptation – building sea walls, for instance – are an understandable human response paralleled by our ancestors thousands of years ago.

Until they realised that the sea-level rise was not going to stop any time soon and that longer-term adaptation – what we refer to today as transformative adaptation – was the optimal response.

“Sea walls don’t help much in the long term,” they would have told us. “Far better to move inland or offshore and get on with life untroubled by rising waters.”

It’s a lesson we may all learn soon.

Patrick Nunn’s latest book Worlds in Shadow: Submerged Lands in Science, Memory and Myth is published Bloomsbury Sigma. A UK-trained geologist and climate scientist, he is professor of geography at University of the Sunshine Coast, Australia and author of more than 320 peer-reviewed publications. www.patricknunn.org