Naz Jahanshahi: seeing the night sky is key to understanding our place in the universe

Having your head in the clouds is no bad thing. The skies have so much to teach us, about our past, our present and our planet’s future. Nazanin Jahanshahi reports

For most astronomers, the desire to look upwards begins from a young age. I always had my head in the clouds. My grandad would ask me to point out the moon whenever possible from the age of two and by the age of seven I had my first telescope from ToysRUs.

It wasn’t only stars that caught my attention; it was everything to do with the sky. I would eagerly watch storms pass by. I went to airfields and air shows to watch planes. I was intrigued by clouds, learning the different types and which weather systems cause them. 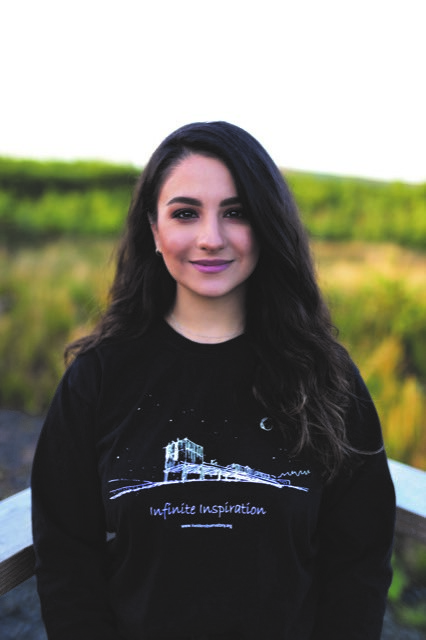 Today, we look at the night sky in a more scientific way than ever before. Doing this has proved some laws of physics that we held to be true, revealing that these laws apply almost everywhere.


The night sky can tell us so much about what is out there – and about our own existence and history.

Our ancestors didn’t gaze up at the sky for sheer enjoyment. The sky and the stars shaped every aspect of their lives, dictating their every move. Observing the sky, the movement of celestial objects and the changing of the seasons was vital for survival.

They watched the sun’s position change through the year and noticed patterns, learning to predict when the seasons would change. Navigators drew patterns in the sky, watched how they moved and used them to navigate at night. Some believed stars to be their ancestors, preserved in the skies having passed. Others saw the stars as gods telling a story from the heavens, which is how we named so many constellations.

Some say we have lost our connection to the natural world. Some struggle to see value in the ebb and flows of that symbiotic relationship. Today, we may check the forecast on our phones in the morning but it doesn’t rule our lives in the same way.

Science and technology have progressed so much in an extremely short time; the blink of an eye in evolutionary terms. But our bodies have yet to catch up. Biologically, our bodies remain adapted to being hunter-gatherers.

Artificial light means we can force our natural patterns to change – we used to take the darkening sky as a sign to wind down for the day. Light pollution plays a huge part in messing up our natural cycles.

Our circadian rhythms rely on the changes in the brightness of the sky. Suppressing these natural rhythms increases our risk of heart disease, diabetes, even cancer.

Animals’ circadian rhythms are being affected by light pollution, too. Artificial light alters migratory birds’ trajectories, causing them to crash into buildings. Baby turtles, whose instinct is to follow the light of the moon out to the ocean, are misled onto brightly lit coastal roads – a disaster for species that is struggling.

Almost everything points to our bodies and ecosystems being forced into cycles that we find unnatural.

Light pollution is a problem for astronomers trying to see the stars; for the general population it creates a disconnect. Studies suggest that 85 per cent of the UK population has never seen a truly dark sky.

The universe has more than 100 billion galaxies that we know of, each filled with millions of stars. Our galaxy alone has between 200 to 400 billion stars, most with at least one planet orbiting them.

And yet, we have not discovered any other life out there. The chance that other life forms are out there is actually very likely, but we may never be able to contact them.

We are completely alone.

If we scaled the Earth’s timeline down to 24 hours, humans would have only existed for one second. But without a reminder from the twinkling stars above, we get so caught up in our day-to-day routines and struggles that we forget we are a blue dot in the universe. We forget to protect our place in it.

The ever-growing bubble of light pollution that surrounds our planet is giving us tunnel vision.

Contemplating the expanse of the universe – the mind-boggling time for which it has existed – can remind us of our forgotten connection to our planet. It makes the story of how our complex lives came into being a lot less fictitious. We remember how much our planet has done for us, how much our existence relies on it.

When I began my journey into astronomy, I wanted to learn to find my way around the night sky. Over time, it became a lot more personal. It reminded me how much it matters to protect our little blue dot in space, to try to reconnect with our planet.

Stargazing is a ritual that has grounded me and brought me solace, that makes me feel luckier and less alone.

It makes my problems seem small; the possibilities endless…

Naz Jahanshahi (@Naztronaut), 26, is a science communicator and astronomer at Kielder Observatory at Kielder Water and Forest Park. In her spare time, you’ll find her climbing whatever rock she can find and taking pictures of the night sky