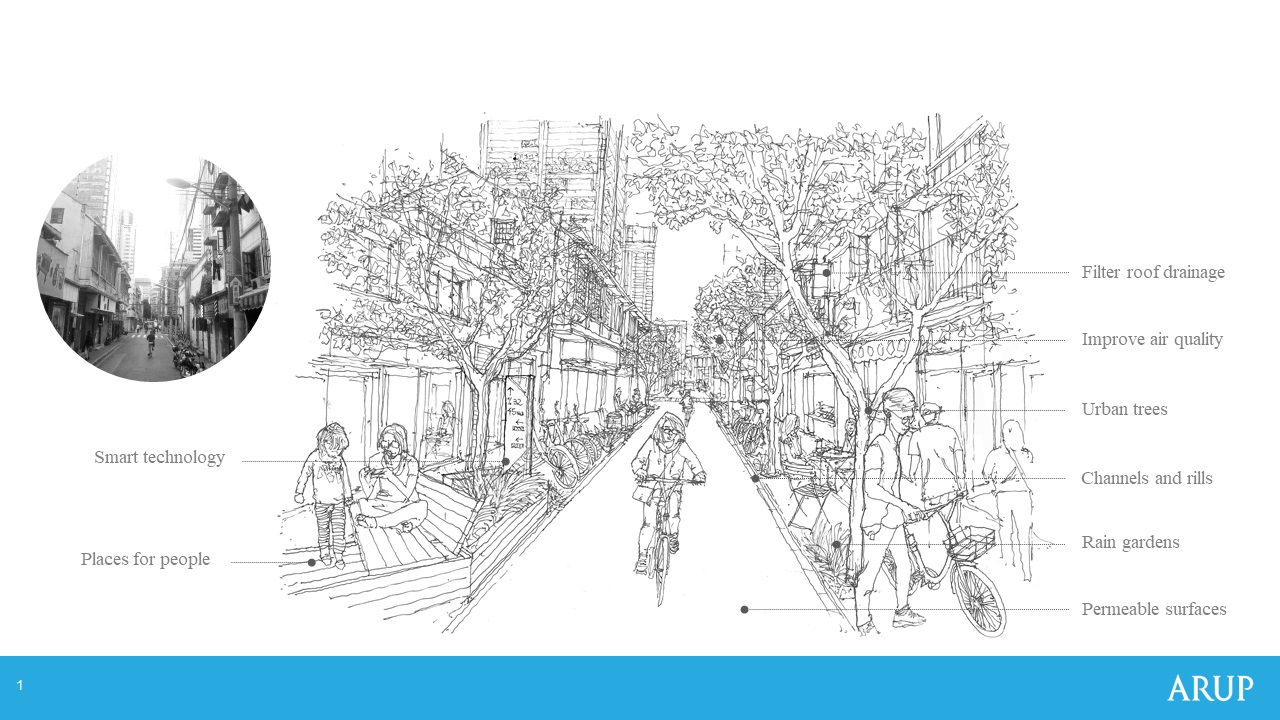 Cost concerns and a mission to improve the city’s resilience to climate change have prompted the Chinese megacity to rewrite its urban-drainage strategy, putting nature-based solutions first, write Thomas Sagris and Michael Zhao


Shanghai has seen rapid urbanisation and population growth over the past three decades. Shanghai’s population has grown from 15 million in 1990 to over 24 million in 2020, becoming the largest metropolitan area in the world.

By 2018, Shanghai’s urban area was almost eight times larger than in 1985. As a deepsea and river port since the 1600s – now the biggest container port in the world – Shanghai’s history has been shaped by water.

But Shanghai faces complex drainage challenges. Flat with a low elevation, the water table in parts of the city is less than 2m below ground level. Unprecedented growth and urban development have increased the Shanghai catchment’s impermeable area and reduced green space, increasing the city’s stormwater runoff.

Shanghai’s drainage systems are ageing, their performance impacted by factors including high levels of sediment, system misconnections and infiltration. Stormwater flooding and water-quality problems linked to the city drainage systems have rightly been recognised by the city as key threats for its future development and achieving its 2035 targets.

The Shanghai 2017-2035 development masterplan aims to build an “excellent global city” of innovation, humanity and sustainability: a world-leading influence which will surpass Tokyo, London and New York.

Having suffered serious urban flooding in recent years from the 300 rivers and canals that cross its urban area, Shanghai also faces river pollution from combined sewer overflows that discharge large quantities of untreated wastewater into rivers, even during normal weather.

Ten years in the making, the 2017 Shanghai drainage masterplan was designed to contribute to the ambitious city-development masterplan, reducing urban flooding and first-flush water pollution of watercourses and canals.

The Water Bureau’s original plan proposed only grey infrastructure; a combination of three large and several smaller tunnels, detention tanks and two stormwater-treatment plants. It recommended nature-based solutions only as a last resort. Impractical for a densely populated city like Shanghai, these would have cost US$43 billion by 2035.

Shanghai’s recently appointed mayor Ying Yong challenged the proposed drainage masterplan due to its cost, lack of adaptability to climate change and limited opportunity for the public to address the drainage challenge.

In 2018, the city authority launched a design competition – the largest ever of its kind worldwide – to explore advanced yet implementable strategies for the highly populated city centre.

Over ten months, Arup and the Shanghai Urban Construction Design and Research Institute developed a vision for the city to be a world leader in urban drainage masterplanning. The strategy had three core objectives: reducing flooding, restoring clean water across Shanghai’s rivers, waterways and parks and delivering solutions to enhance the wellbeing of people, the city and the wider environment.

China has created and applied the concept of sponge cities to Lingang, Wuhan and Nanganqu. These cities are designed to absorb large quantities of water through permeable roads, wetlands, green roofs and other spaces to manage and treat stormwater. This is not a new concept, but only China has put this approach into practice on such a large city scale.

To develop the strategy, Arup studied global cities including Philadelphia, Singapore, Copenhagen, New Orleans, Rotterdam, Tokyo, New York and Miami. We identified those cities that align most closely with the specific challenges faced by Shanghai, its climate and the wider environment.

This insight informed the new plan’s approach, to ensure that Shanghai builds on local context and on global best practice to lead the world in urban drainage masterplanning.

The strategy to deliver the masterplan objectives and meet the required standards and outcomes was based on four core principles.

Systems-led: interventions implemented across the interconnected systems that make up the Shanghai water environment. The strategy was optimised across four systems:

Adaptive: interventions aligned with an adaptive management approach that provides flexibility to address future uncertainty and new insight, avoiding inefficiency and unnecessary spending and delivering better outcomes over time. This is based on a phased strategy that looks at small interventions that can be delivered quickly alongside planning large infrastructure.

A key element of the strategy has been to introduce additional green infrastructure to Shanghai.

However, identifying sustainable drainage opportunities at large scale can be repetitive and time consuming. Arup and its partners are using machine learning, artificial intelligence and open-source earth-observation data to identify urban typologies and green infrastructure solutions to address the stormwater challenges in the city.

That made it possible to produce a draft masterplan for a 650km2 area, quickly and efficiently.

The solutions were verified in three districts, using detailed integrated modelling studies to provide confidence to the Shanghai Water Bureau.

It aims first to maximise the potential of existing facilities and infrastructure before proposing anything new, with an initial focus on better management. Second, it aims to expand existing green spaces’ functions to manage stormwater and identify further locations for cost-beneficial retrofit of nature-based solutions.

Third, it proposes an expanded integrated model that covers Shanghai’s water and wastewater systems, to optimise the existing separate and combined system and the river/canal network and to explore identified opportunities to improve stormwater management.

Finally, where there is no other option, the masterplan addresses remaining needs for flood protection and water-quality improvements, using grey infrastructure such as strategic tunnels and localised storage tanks.

It took ten months of hard work to refine and validate the proposed strategy. The drainage masterplan was formally reviewed on in August 2019 by a national panel of ten experts in water management and sponge cities, urban planning and economic development.

Chinese Academy of Engineering academic Zhang Jie, who led the expert team, summarised the review findings: “The masterplan is internationally advanced, technically feasible, and economically sound; it will lead the direction of national drainage planning.”

The regulations that included the revised urban-drainage masterplan were approved in December 2019 and came into effect on 1 May last year. These regulations provide the legal guarantee for implementing this masterplan and for building and managing drainage facilities.

The proposed stormwater strategy will be integrated into all urban planning and design projects and critical infrastructure-investment areas, including transportation, water, energy, digital and waste.

This visionary, integrated approach aims to deliver the core objectives linked to urban drainage, flood control and pollution control – but also wider impacts; enhancing the wellbeing of Shanghai’s citizens, improving water quality and ecology for its rivers and canals, making the city safer and more resilient and growing the economy.

Finally, it will drive extensive collaboration to develop and deliver multi-functional solutions and outcomes for all stakeholders.

BOX: Shanghai – a history of trade, fishing and enterprise

Shanghai’s history stretches back some 5,500 years. Its location made the city a link between the port cities of north and south China and of Southeast Asia.

In the 1920s and 1930s, Shanghai evolved from a traditional circular city with canals and narrow streets into a modern metropolis, adding European-influenced districts that accommodated new economic activities and residential needs.

However, from the early 1950s to the 1990s, Shanghai lost ground as an international centre of growth and development to cosmopolitan financial hub Hong Kong. Instead, it became one of the largest industrial centres in China.

As with other cities in China, Shanghai’s real transformation started in early 1990s. Chinese leader Deng Xiaoping declared the city "the head of the dragon" that would pull the country into the future. Since then, Shanghai has become a global centre in finance, trade and banking and a showcase of China’s economic success.

Thomas Sagris is an Arup Associate based in Leeds and Michael Zhao is Chief Manager for Arup Water in China.