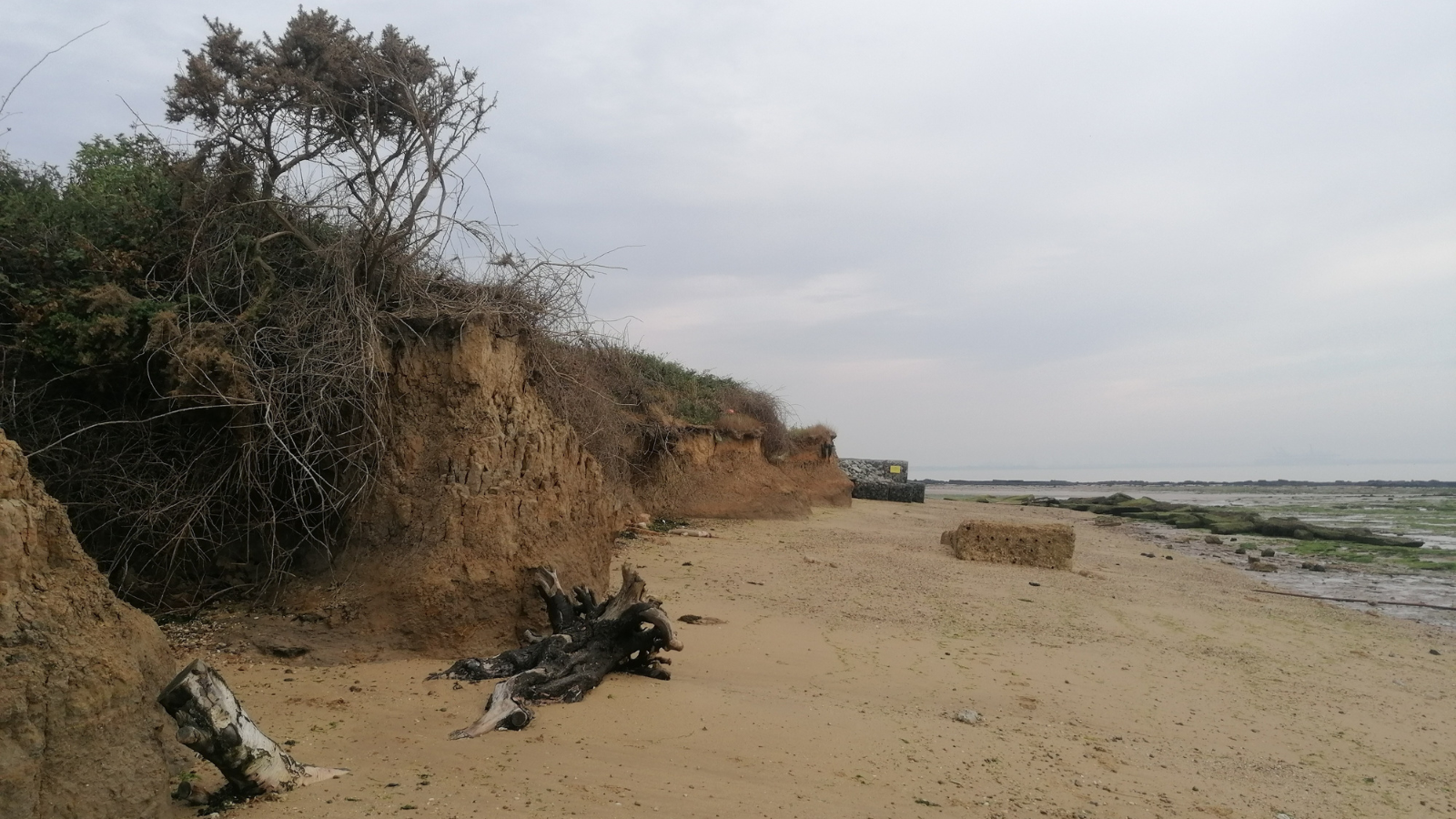 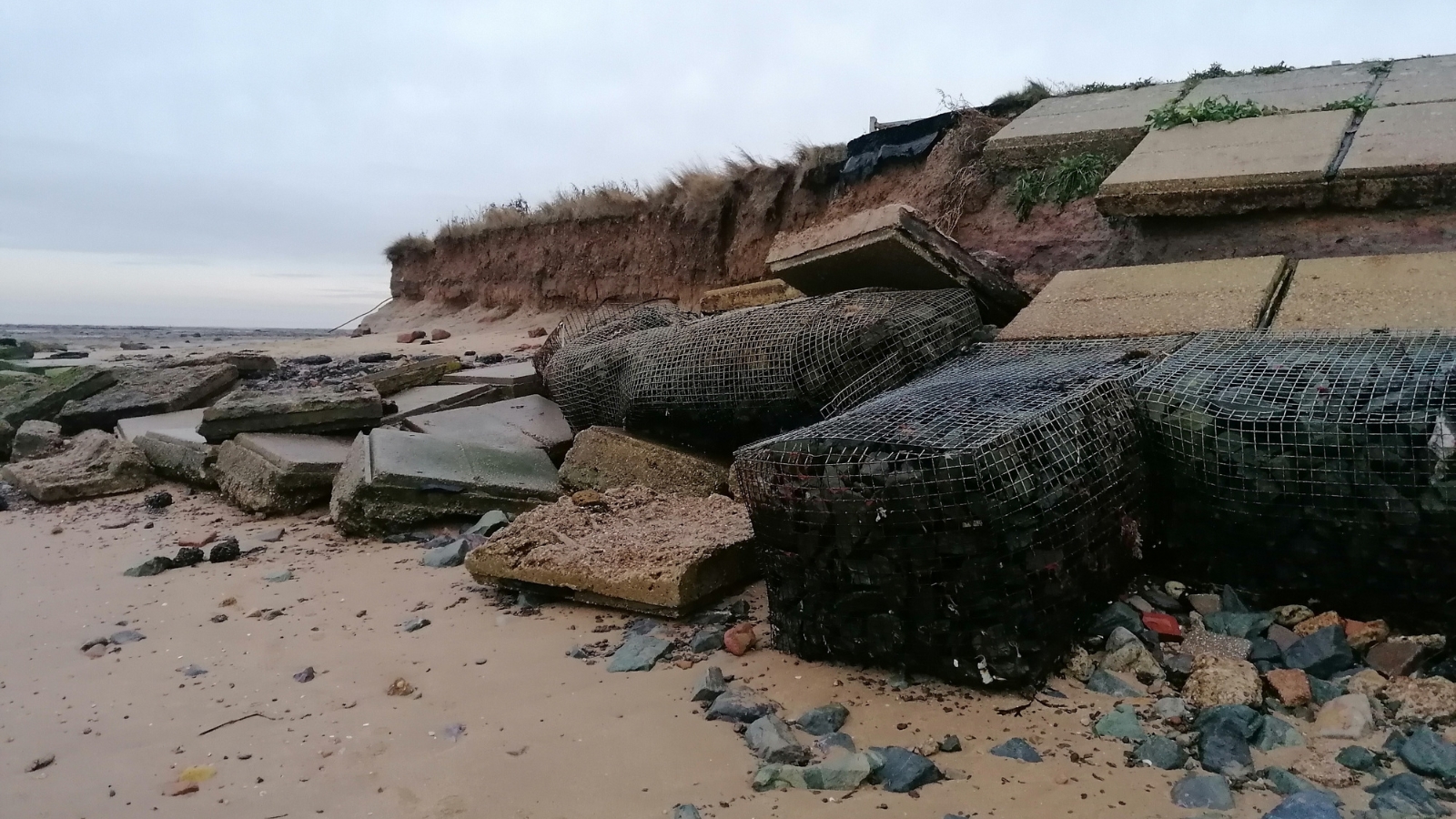 The sky hangs grey and heavy over the Essex fields. Hard rain pelts sideways across Hamford Water. Overnight storms have made lakes of roads north of Walton-on-the-Naze. Marshes and mudflats melt into a blurry, sodden mass.

For a day out, this would be grim. As portents go, it’s a small preview of the future that awaits this low-lying region of farms, abandoned fisheries and scattered hamlets.

Essex, on the UK east coast, has always lived with storm surges that flood the land from the sea. It has a longer coastline than The Netherlands. All that stands between this corner of rural Essex and the next big North Sea storm is the Naze.

The name is Old English for nose. This easternmost point of Essex is a natural headland, a prehistoric coastal defence. Thousands of fossil hunters, walkers and birdwatchers visit this site of special scientific interest (SSSI) every year.

But the sea is eating into the Naze. Erosion rates have doubled since 2016, says Naze Protection Society (NPS) acting chair David Eagle. Walton’s cliffs are eroding between 1.5m-5m a year. Without protection, NPS says, the peninsula will lose its northeast beach within three years.

Local people formed NPS in the nineties, to campaign and raise money to preserve and protect the Naze from erosion. It’s part of Naze Management Board (NMB), the partnership of local authorities, land and business owners, agencies and EWT that looks after this stretch of coast.

Central government sets priorities to manage England’s coasts. And budgets are under the cosh. Natural England, the Environment Agency and the three local authorities must urgently protect urban stretches of Essex coast. In agency-speak, the Naze is low-value, non-residential land.

The Naze has no coastal-change management plan. “The Environment Agency shoreline-management plan is to hold the line on the sea walls, with no active intervention on the cliffs,” Eagle says. “A review has allowed local activity. But things are tight. The agency says it can only spend money where there’s sufficient cost benefit. In other words, to protect property and life.”

So NPS must raise the funds to protect the Naze. It aims to raise £60,000 a year to defend the north beach; to buy the headland 25 more years.

It has a track record. In the 2010s NPS helped to raise £1.25 million to build Crag Walk – engineered defences that create a throughfare for walkers along the cliff below Naze Tower. That campaign also led NMB to be formed.

If local people put up £20,000 NPS can lobby the district, town and county councils and local heavy-hitters Anglian Water and the ports of Harwich and Felixstowe to make up the balance.

NPS plans a 50m line of rock gabions, stacked three high, to protect the north beach. Tendring District Council (TDC) has approved the project. But can NPS amass the rest of the money?

“We’re trying to get the area evaluated for a natural-capital survey,” Eagle says. “The Natural England formula requires 10,000 ha. Our area is too small, at just 2,000 ha.”

If TDC teamed up with Suffolk network the Stour and Orwell Estuary Management Group NMB could press Natural England to conduct a natural-capital survey of this larger area to create a management plan. That larger partnership would also open new sources of grant funding, Eagle says. But TDC would need to agree that plan.

But the repairs are urgent. The northeast corner of the Naze was eroding 2m-2.5m a year but the wall west lost 5m in winter 2019. In 2021, the sea broke through to the clay beneath the seawall. Just 6m of counterwall clay remains. It really is a race against time.

Eagle’s mother remembers the storm surge of 1953 that drowned 300 people on England’s North Sea coast. It demolished a mile of sea wall around Walton and left carcasses of foxes and livestock to rot above high-tide line on the Naze. Government bussed in conscripts from Colchester Barracks to clear the mess.

“If the 2017 storm had happened on the high tide, we’d have faced a 5.7m surge,” Eagle says. “We have 5m sea walls. Yes, there have always been storm surges. But they’re happening more often.”

Some reports paint the bid to protect the Naze as a David-and-Goliath battle: NPS versus the sea. But Eagle’s family has farmed the Naze for four generations. He works with nature wherever he can.

His great-grandparents raised sheep and cattle. Eagle has moved into permaculture. He plans to go organic. In the 2010s he surrendered 50 acres to the sea, creating a wetland that draws migrating birds including brent geese from Siberia. The saltmarshes are creeping back, growing around 3mm a year.

But to lose the Naze is the red line for NPS. Campaigners say it’s all that protects northeast Essex from rising tides. Without it, the region faces millions of pounds worth of flood damage.

Increased flood risk will wipe out property values. It threatens 200 jobs. At stake are homes, farmland, 20 ha of SSSI freshwater habitat, boat yards, a yacht club and marina, a chemical factory, a gin distillery and an Anglian Water wastewater-treatment plant that processes sewage from 26,000 residents.

Local politicians are worried. “If the northeast corner of the Naze goes, we lose the whole bloody lot,” says TDC cabinet member for coast protections and seafronts Nick Turner.

The battle to save the Naze is a story of our cash-strapped times. Of our climate futures. It’s a story about local people fighting the odds to protect and defend themselves. It’s about a gap, Eagle says, between Defra national policy and how officials interpret and deliver that policy on the ground.

Government’s 25-year environment plan pledges to “reduce risk of harm to people, the environment and the economy” from flooding and coastal erosion, he says. It promises to use the latest available evidence to create “appropriate” defences.

And it’s a battle against red tape. NPS has struggled to secure a Marine Management Organisation (MMO) licence to start the works.

MMO manages England’s coasts up to the high-water line. TDC and local MP Giles Watling have pressed the MMO to issue the licence. But the MMO is asking for a new environmental-impact assessment. TDC has challenged that decision.

Which means deadlock to save the Naze. Works due to end in autumn 2022 will now start in May, after bird-breeding season. But the 2020-2021 winter’s storms opened a 30m crack along the clifftop. The delays expose the Naze to a second winter of rainstorms and surging tides.

The battle isn’t over. TDC coastal engineer James Ennos says the works will start come the spring. He wants to draw up a five-year plan, agreeing priorities to protect the marshes and backwaters. “We are moving forward slowly,” he says. “Even if sometimes one step forward equals two steps back.”

But this story highlights how struggling to protect your home or business can become a battle on all fronts – raising money in cash-strapped communities, creating partnerships to chase new funding pots, wrestling rising costs and red tape – all of it in a race against time.

Partnerships are the answer. But partnerships, pulled in different directions by competing priorities, are tricky – to create, to access and to navigate.

“There are no deep pockets of money anywhere,” says TDC chief executive and Naze Management Board chair Ian Davidson. “We have to deliver cost savings across all our budgets... Protecting the Naze will come down to stealth funding. We have so many other, competing priorities. We’ll have to come up with ever more inventive ways to raise the money.”

Eagle has fixed his gaze on the longer view. “Doing this is tough,” he concludes. “If the Naze Protection Society wasn’t doing what it’s doing nothing would happen. There is no money. And at the moment, at least, most people don’t perceive the risks.

“It’s taken 20 years to engage with the agencies, to build up a rapport, to understand the issues and everyone’s agendas and to look for areas of compromise. If we don’t respect everyone’s agenda’s we won’t get anywhere.”

Karen Thomas is editor of The Environment.