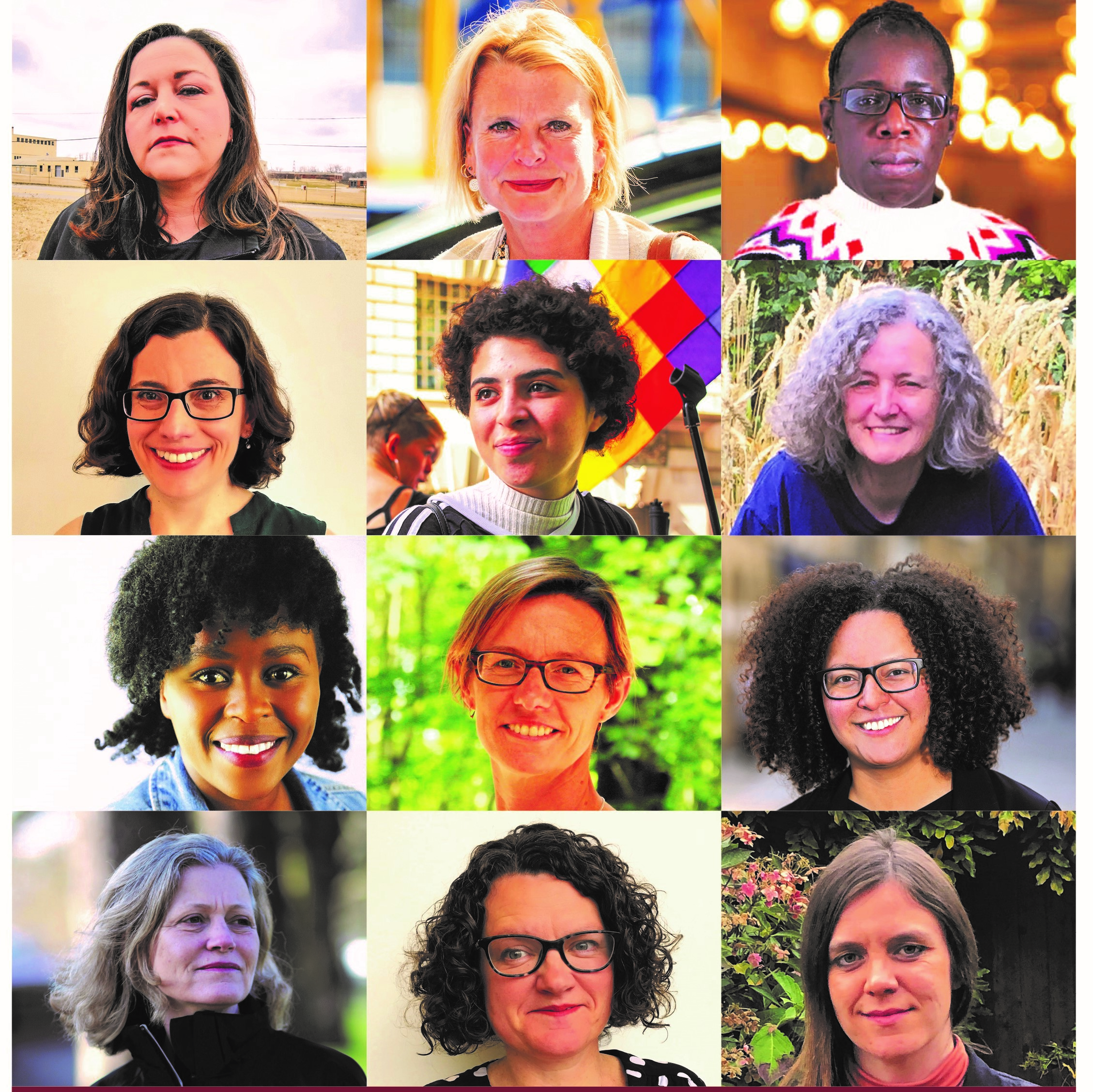 The Environment asked women from the extended water and environmental management family to name the woman working in water, environment, sustainability and the climate space who most inspires them

I’d like to nominate Kathryn Brown, head of adaptation at the Committee on Climate Change (CCC). Kathryn worked with a very small team to co-ordinate more than 200 contributors to the Evidence Base for the UK’s third Climate-Change Risk Assessment.

Kathryn blogs about important climate adaptation issues and has also organised a very successful conference to highlight the risks of 3˚C+ warming. She supports the Adaptation Committee on the CCC very successfully to enable significant changes in government policy on adaptation.

Beth Koigi is chief executive and co-founder of Majik Water, which harvests drinking water from the air for off-grid communities in Kenya. She is a true visionary whose pioneering technology will transform the lives of communities across water-scarce areas.

There is no better example of this than the Ark Children’s Home in Thika, Kenya, where children and staff now have access to 50 litres a day of clean, safe drinking water from the atmosphere, thanks to Majik Water.

We are so proud that Beth agreed to tell her story in the documentary Brave Blue World – she will be a source of inspiration to innovators for many years to come.

Waterwise managing director Nicci Russell works tirelessly to promote water efficiency and reduce water consumption. Her team’s campaigns and events are gaining traction in the UK as awareness of climate change and population growth increases. Waterwise’s work is critical to ensuring we have sufficient water resources for the future and in reducing per capita consumption. I would like to see Nicci recognised for the tremendous work that she does.

I am moved by the tenacity and leadership shown by the US campaigner LeeAnne Walters, founder of the citizens’ movement that helped to expose the presence of highly toxic levels of lead in the drinking water in Flint, Michigan.

LeeAnne galvanised her community to demand action after her own family’s health was impacted by lead poisoning, sought help from environmental engineer Marc Edwards from Virginia Tech, then took it upon herself to carry out rapid, extensive and methodical water testing in the city.

LeeAnne demanded action after her family’s health was impacted by lead poisoning, taking it upon herself to carry out rapid, extensive and methodical water testing in Flint, Michigan

Women’s Equality Party leader Mandu Reid is the first person of colour to lead a UK political party. She also founded The Cup Effect, to empower women and girls in the UK and east Africa to live every day with dignity by providing them with menstrual cups.

Without access to menstrual products girls often don’t attend school. These cups protect the planet by reducing waste and plastic pollution and by donating two cups for each one it sells, The Cup Effect is reducing period poverty for many around the world.

To enable real change, we must ensure everyone has a fair opportunity to access education. In founding The Cup Effect, Mandu is working to reducing the immediate environmental impact of disposable sanitary products and, the longer term, opening opportunities for more women and girls to change the world.

Environment Agency chair Emma Howard Boyd is well known for her background in finance and for the fresh, innovative thinking she brings to green finance. Others know her for her climate work and her determination to take climate adaptation seriously, as well as mitigation.

But others will have been touched by Emma’s work through The 30% Club and within the Environment Agency to support women and all types of equality. Emma brings all these things together, showing real passion and kindness to those she works with. She is a great role model for women and men across our sector.

I have been very impressed by Asa Regner, the Swedish politician who is now assistant secretary-general of the United Nations. Her recognition of the impacts of climate change, particularly on women in poorer countries, and the necessity to include them in finding solutions and in mitigation has been an important contribution to progressing several of the UN’s sustainable-development goals.

Deborah Colvin, churchwarden at St James’ Piccadilly in central London, is an educator and activist. She has led the church to Eco Gold award status through the A Rocha scheme, one of only a handful of churches in this country to do so, something particularly challenging in this urban environment.

St James' has taken a systemic approach to building a biodiverse, carbon-neutral site, rooted in inclusive theology and community. It’s inspiring to see how Deborah brings together scientists, artists and people of faith to develop initiatives and discussions about the environment and climate. She brings a wide, socially inclusive perspective to her work.

I have been very inspired – and challenged – by how Deborah has shifted the language relating to climate change and the environment, particularly in a church context. I am hugely inspired by her ability to hold up a mirror, compassionately, to our daily lives in the west and the economic and spiritual systems in which we live.

Beneath Rosamund’s successes lies the most crushing loss. Ella was a smart, sporty girl with a megawatt smile. Rosamund is a credit to all her children, an inspiration to everyone else

I’d like to nominate Donna Hume, head of campaigns at C40 Cities. I first met Donna at Friends of the Earth, where she was instrumental in getting the government to introduce the feed-in tariff for renewable energy, which kick-started the UK’s whole renewable-energy industry.

I nominate Noga Levy-Rapoport, who is 19 years old and a climate-justice campaigner. Noga volunteers with the UK Student Climate Network, which hosted the largest climate strike in UK history in September 2019.

Noga has been campaigning to decarbonise the economy and improve climate education in schools and throughout the pandemic, she has organised digital climate strikes. In any emergency, fast response times, co-ordinated working and having the right resource is vital. Noga inspires me to put more urgency into the climate emergency.

I nominate circular-economy specialist Emma Burlow. Few know the subject as well and, in a world that increasingly wants simple soundbites, Emma is brilliant at conveying complicated concepts in ways people understand. She also influences a very male-dominated world of waste and resource management.

Emma’s confidence and purpose was evident when we first met at university. Today, she is a role model, showing what it is to live in an environmentally mindful way. Emma recently left Resource Futures where she headed the circular-economy consultancy and has set up as an independent consultant, helping businesses to understand the opportunities and to make the transition to becoming circular.

CIWEM trustee and manager of the Centre for Resilience in the Environment, Water and Waste, University of Exeter Nicky Cunningham

Of hundreds of people I’ve interviewed for this magazine, the one who stands out is Rosamund Adoo-Kissi-Debrah, South London mum and former headteacher turned clean-air campaigner.

Eight years ago, Rosamund lost her daughter Ella Roberta, nine, to a rare, severe form of asthma. The family lives off the South Circular, one of London’s busiest roads. Rosamund fought hard for a new inquest, to prove that air pollution killed her daughter. In December, she achieved a landmark ruling when the coroner found in her favour.

Appointed the World Health Organisation’s first advocate for health and air quality, Rosamund ranked third in the 2020 Woman’s Hour Power List: Our Planet. Beneath her many successes lies the most crushing loss. Ella was a smart, sporty girl with a megawatt smile. Rosamund is a credit to all her children, an inspiration to everyone else.