If COP26 was a game of two summits, youth climate campaigner Vanessa Nakate was the People’s COP’s breakout star. How did a shy graduate from Uganda become the conscience of a global movement? Karen Thomas reports 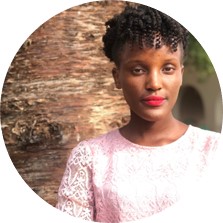 Like heroes of screen and sport, so many young climate leaders are first-name famous. There’s Greta, Youth Strike For Climate’s austere founder. Brianna, earth mother from the sinking Pacific. Autumn, the First Nations water protector from Canada. Mitzi, the fierce style queen from the Philippines. And there’s Vanessa.

Uganda-born Vanessa Nakate is the activist COP president Alok Sharma called on stage when November’s climate talks were floundering. She made the cover of Time last year, interviewed by Angelina Jolie. And now she’s published her first book.

Two years have passed since Nakate was edited out of a youth-climate photo call at Davos. Just three since the shy Kampala business-admin graduate, inspired by Greta Thunberg, rallied her brothers and cousins, scrawled some placards and launched a climate protest outside Uganda’s House of Parliament.

But if Thunberg’s steely determination created the movement, Nakate may be its heart and soul.

Nakate’s second interview with The Environment is in real life. We meet at her London publisher’s offices. Hillary Clinton and Marcus Rashford gaze down from the bookshelves. Just how did Nakate, now 25, get here?

Africa emits just 3 per cent of the world’s greenhouse gases but is feeling the worst effects of climate change. Wild weather is ever more common – and more destructive; from droughts killing wildlife in Kenya, to snowstorms in South Africa and Lesotho to last year’s floods across South Sudan.

Nakate knows now how climate change is wreaking havoc across Africa. She knew less in January 2019, when her uncles mentioned Uganda’s dry season getting drier, the rainy season bringing more storms and floods.

The more she looked into it, the more she could link that wilder weather to climate change. So she marched her brothers and cousins to parliament, and posted the protest on Twitter. Thunberg retweeted her support. Social media joined the dots across a continent. Hundreds more young Africans launched school strikes and climate protests. By September 2019 thousands, from Angola to Zanzibar, joined the global climate strike.

Nakate harnessed that energy to co-found Youth For Future Africa and the Rise-Up Movement. “I wanted to create opportunities for activists across Africa to tell their stories, to provide their solutions, to get justice for climate disasters in their communities.”

Her own solution is education. She launched the Green Schools Project to install eco-friendly stoves and solar panels in Ugandan schools and stop demand for firewood stripping Uganda’s forests, while educating children about climate change.

By autumn 2019, Nakate was addressing world leaders at COP25 and had launched a continent-wide campaign to stop clearances and climate damage shrinking the vast Congo rainforest.

In January 2020, Nakate and other activists were invited to Switzerland to camp in the snow outside Davos to press world business leaders to tackle climate change. Nakate addressed the press conference and joined a photo call with Swedish campaigners Thunberg and Isabelle Axelsson, Germany’s Luisa Neubauer and Switzerland’s Loukina Tille.

The photo was published, with Nakate cropped out. Shocked, she posted a tearful video, explaining that to erase the lone African activist erased a continent’s climate experiences. “This is the first time in my life that I understood the word racism,” she said.

Arriving at COP26 uninvited to speak, Nakate emerged as the breakout star. She addressed plenaries and press calls. She outgunned Yuval Noah Harari in a New York Times debate.

But she found COP26 problematic, off-limits to most Indigenous and Global South activists. “A good COP fully represents activists from the most affected areas,” she says. “We must work so that these voices are platformed.”

And then there’s loss and damage. Rich countries broke their 2009 promise to deliver US$100 billion (£73 billion) of climate finance annually from 2020 to help poorer countries to cut their emissions. Meanwhile, Africa is suffering billions of dollars’ worth of damage due to global heating. Nakate says climate-vulnerable nations need loss and damage funding now.

The polluters must pay, she says. Carbon Brief’s report on countries’ cumulative emissions names the culprits. The UK ranks eighth in overall emissions, fourth for its fossil-fuel impacts.

Fossil-fuel firms must pay too, she says. “Because we can’t eat coal. We can’t drink oil. We can’t breathe natural gas.”

Glasgow did not deliver on loss and damage. COP26 agreed only to fund the Santiago Network, to build technical expertise. That leaves climate-vulnerable states pressing for a funding facility for loss and damage before COP27 opens in Sharm El Sheikh in November.

Nevertheless, Nakate and Thunberg landed a £1 million coup. After a private COP26 meeting with them, Scotland’s first minister Nicola Sturgeon became the first developed-world leader to donate to the Climate Justice Resilience Fund. Belgian region Wallonia followed up with a €1 million pledge.

What does loss and damage look like to a young Ugandan woman?

“People are losing their homes, their farms as temperatures rise,” Nakate says. “Many lost everything after the 2020 floods and landslides – not just homes or incomes, but their histories and connections to their own communities.

That means unemployment, homelessness, children begging on streets to help their families. The climate crisis is reshaping every aspect of Ugandan life, Nakate says, including education and marriage prospects for women and girls.

“It’s evident in societies where women and girls grow and provide food, and collect water and firewood,” she says. “It’s women and girls on the frontline when farms are destroyed. They walk longer distances to collect water. They drop out of school or get forced into earlier marriages.

“The women and girls we see rising up for the planet understand the urgency of the crisis. We are speaking up and demanding a cleaner, more sustainable world.”

Beyond Uganda – beyond Africa – Nakate enjoys an international sisterhood of activists. Introduced on social media, they meet at international summits – online in between – to swap strategies and tactics.

And yet Nakate still feels an imposter every time she addresses yet another president or prime minister. “I used to get so scared doing university presentations,” she recalls. “I’d be shaking when the lecturer made me explain my papers; shaking so much it was embarrassing.

“But this – it’s given me a certain kind of confidence. It’s easier now to speak. Finding your voice starts with understanding your own passions. I’d advise any other young person who wants to start climate activism to connect with one of the groups already out there.”

Thunberg has described having autism as her superpower. What is Nakate’s? Few speakers share her power to move her listeners. It’s empathy, I suggest.

Nakate is having none of it. When pressed, she puts it down to faith. “My Christianity has taught me love and grace and my responsibility for taking care of creation,” she says. “That adds to my activism.

“I have a responsibility to take care of nature, of creation to benefit all of us… So when I meet people who have experienced climate disaster – who’ve lost a farm, a business – I can put myself in that place; feel what they’re feeling. I get emotional talking about climate change, because I can feel how it must be to have lost everything.

“Faith keeps me going, because activism can be hard. My Christianity puts faith in things we hope for – hope for things we’ve not yet seen. I believe. I believe that it is possible to achieve it. We all know another world is necessary. I know this other world is possible. That we can achieve it. I don’t know if I should call that a power – but it’s what helps me.”

Critics say COP26 was long on words and short on deeds. But it was pressure from Nakate and her peers that forced the summit to accept the science and to adopt a more urgent tone. Does she feel new doors have opened?

“Maybe just rethinking the growth model that keeps us on this track,” she says. “If that door is open, it’s because the activists didn’t stop organising, even during the pandemic. We pushed the window open to discuss loss and damage, and climate finance, and putting an end to new fossil-fuel projects.

“And that’s thanks to the continuing to put pressure on leaders to demand justice. It’s the power of the people that has pushed the window open.”