Scotland and the circular economy: what goes around 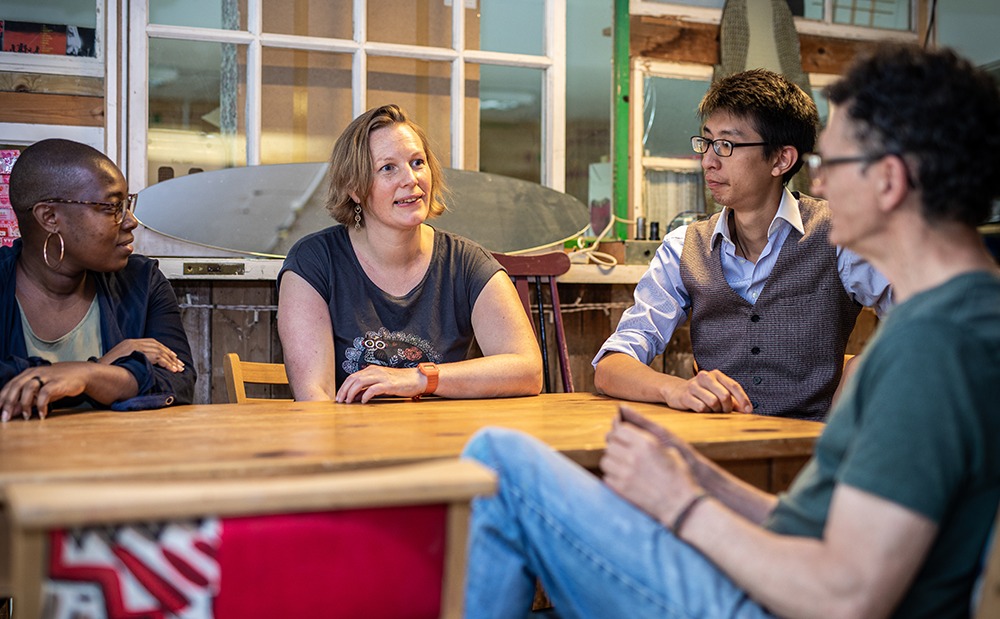 Could better ways to manage our waste and resources also reconnect fragmented urban and rural communities? Remade Network is building up a business case for community hubs that encourage people to share, repair and come together. Karen Thomas meets founder Sophie Unwin

WALK DOWN THE shallow steps to the Remakery in Brixton, and something is clearly different about this South London community space. It takes a while to work out what.

Further back, the purpose of the space becomes evident. Groups and individuals rent space to make new things from old. Brightly lit workshops are crammed with tools and materials for carpentry, handicrafts and metalwork. Scrap metal sculptures of beasts, birds and fish hang from the walls. A carpenter turns his lathe, transforming bits of old wardrobe into guitars.

In the derelict garages out back, piles of waste – timber, spare parts, dead bicycles, an old piano – wait to be sorted, assigned new purpose and passed on.

Brixton Remakery could be the early model for a new venture seeking to monetise and mobilise a national and international network of remakeries. Its co-founder Sophie Unwin moved up to Scotland in the mid-Noughties, where she set up Edinburgh Remakery in 2011, growing it to premises on Leith Walk.

Unwin has consulted on projects from Brooklyn to Berlin. But her new business plan aims to take the concept mainstream, creating a network of local hubs to encourage us to use fewer resources, send less waste to landfill, pass older manual workers’ skills to the next generation and regenerate broken communities.

Unwin became a self-confessed reuse-repair-recycle geek as a teenager, when she lived for a year in Nepal. That year, she and her five housemates threw away less than a dustbin of rubbish. “We used everything we bought,” she recalls.

“We hoarded containers, because they were expensive. Whatever we broke, we fixed. When I came home to London it was a massive culture shock. I realised that how we live here isn’t inevitable – it’s a cultural and an economic choice. My father did a job he hated and died young. That taught me an important lesson.”

Uncomfortable with turn-of-the-century conspicuous consumption, Unwin studied sustainable development. She visited Flanders where the regional government subsidised households to keep livestock to eat waste and where secondhand and thrift stores were mainstream.

She co-founded Brixton Remakery soon after the financial crash. “I stood up at a local environmental meeting and said, why can’t we have a community centre where our elderly immigrants can teach the unemployed bankers something useful?”

Having moved countries, Unwin spent a long time scoping out Scotland’s political, social and funding structures before launching Remade in Edinburgh, now the Edinburgh Remakery. She didn’t want to undermine existing projects or tread on people’s toes. That stocktaking prompted her to rethink the business model, seeking ways to link up individual community projects, increase local collaboration and create a joined-up approach.

Edinburgh Remakery pledges “a repair revolution”. A social enterprise, community repair hub and secondhand shop, it works to reduce waste, fixing and giving away or reselling unwanted IT equipment, furniture and homewares.

Regular workshops include hand and machine sewing, upholstery, upcycling and furniture restoration and woodwork. Workers repair mobile phones and laptops, charging only for labour time and parts, training others to fix equipment, rather than upgrade.

What mattered was to make that a viable business, Unwin says. “We needed to challenge the idea that it’s just a nice little project about crafts and show it can also make money. Over the seven-year period to 2018, I grew Edinburgh’s annual income from £60 to £240,000, increasing this to 80 per cent traded income, and created 10 jobs.

“I did this by being clear-eyed about which activities make money and which we support because they’re nice to have and asking the team to interrogate everything we did – not just financially, but in terms of the social and environmental impact.”

Moving away from a funded to a social-enterprise model demands cultural change, which takes time.But Unwin sees Scotland as a good place to start, as the government aims to deliver a wellbeing economy and has pledged to reach net zero carbon by 2045.

Working with existing community groups, Remade Network aims to create 1,000 jobs by 2035 and to break even within three years. “We need to build a whole economy around repairs in villages and towns and cities, testing what works where and focusing on the education side of the business,” Unwin says. “And that means having a conversation with people about what our society is.”

In the past year, start-up funding has enabled her to develop and test a toolkit to train more than 60 groups, from Scotland’s largest cities to the island of Jura. “This can’t be a one-size-fits-all-model”, she says. “In more rural communities, with fewer facilities and with a greater sense of connection, a reuse and repair culture may be more intact. But there’s still big demand for this work, and for reviving a culture of repair.”

That means getting practical. In one afternoon, the local community fixed more than 20 items, from tables to hair straighteners, to a Buzz Lightyear action character. One reason people waste items is that they have few alternatives, Unwin argues; they need better options to make better use of broken and unwanted things.

“People do care,” she says. “People want alternatives. It’s all too easy to blame them for not doing enough, when the facilities don’t exist to help people to do things differently. We’ll create the infrastructure for them to do that.”

In scaling up, Remade Network aims to apply the principles of reuse and recycling to community space, repurposing derelict or unloved buildings to bring together fractured communities, reinvigorating run-down streets.

Unwin wants to test the model in different locations, and has identified the first five. The Remade Network aims to raise £1 million to get these off the ground. That means turning to private-sector donors.

“Companies are starting to realise that the circular economy matters,” Unwin says. “And the companies leading on this are seeing a competitive advantage – not just in terms of publicity, but in how they communicate with their customers and staff. The price of raw materials will go up. We are simply going to have to do things differently in future.”

Remade Network aims to deliver change from the top down, helping people to live more sustainably, creating jobs and cutting people’s costs. But it also wants to change society from the ground up, tapping people’s knowledge and skills, interrogating our all-consuming shopper culture to put people and places first.

“Why can’t we make decisions about how we reclaim land and space for regenerative industries,” Unwin says. “That could include renewable energy or afforestation – all these things that bring positive socio-economic and environmental benefits.

“We’re paying £130 per tonne, including the gate fee, to send waste to landfill. Couldn’t we better use that money to support a reduce-reuse-repair model, to generate financial returns and benefit the environment?

“We need to raise this again and again, until people get the point,” she concludes. “The world as it is is not viable and when you see how things can change – the skills and the great ideas people have, the possibilities to bring people together – that’s so positive.

“Regeneration shouldn’t be about property development, it should be about people and their resources, about valuing people and places.” 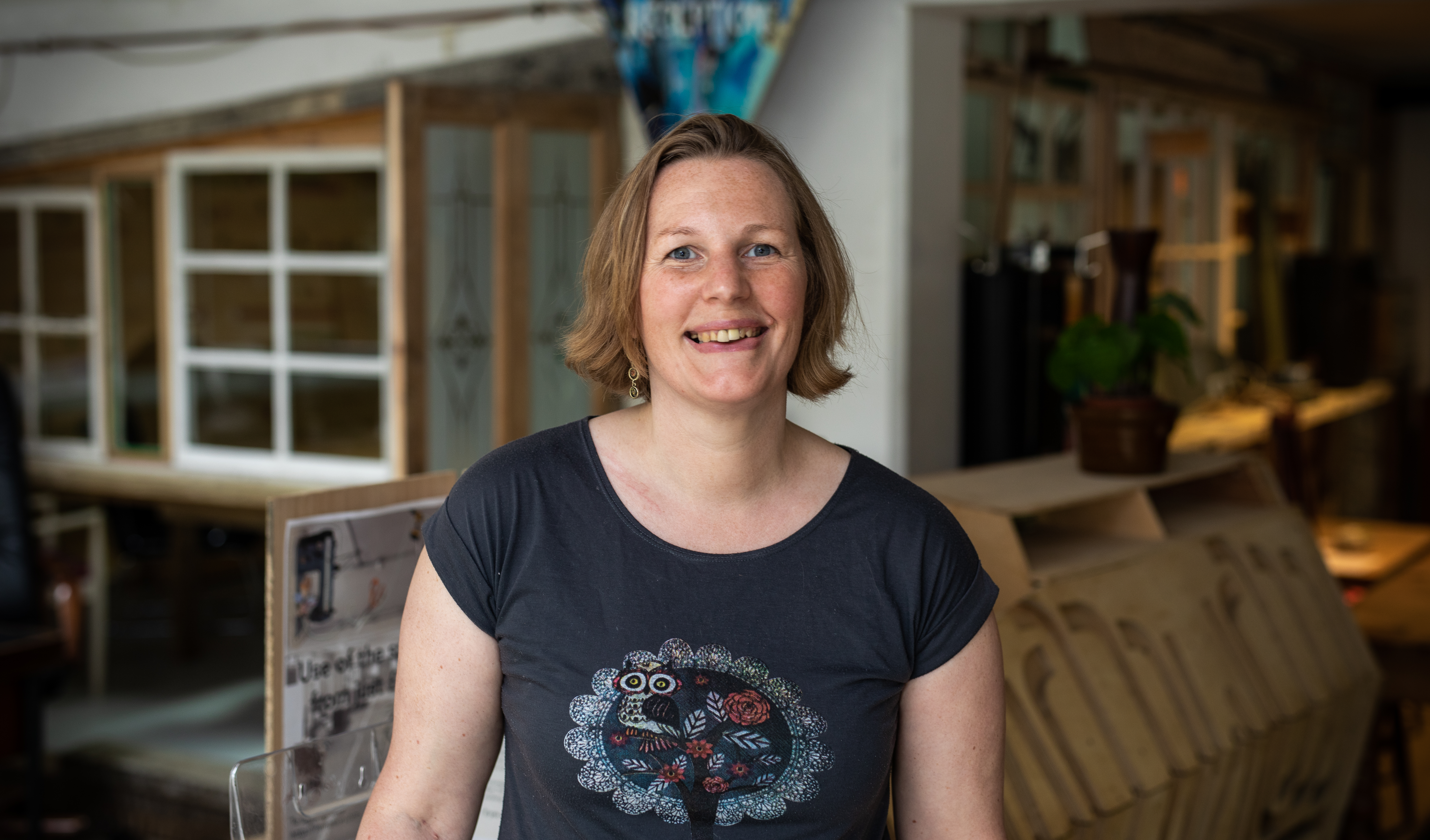