Water & Environmental Management Pride (WEM Pride) has been established to provide a network for LGBTQIA+ people and their allies working, studying and volunteering within the WEM sector and in particular for members of CIWEM.

It is still the case that many WEM LGBTQIA+ individuals feel it is inappropriate, unprofessional, unnecessary or unsafe for them to be out within their organisation and some face daily microaggressions or overt homophobic behaviour at work, which takes time and energy to deal with (as it is illegal under the Equality Act 2010’s Protected Characteristics). Greater progress on EDI requires awareness, acceptance, inclusivity and action for all marginalised identities and communities across all sectors and geographies to prevent discrimination and harassment. WEM Pride starts that conversation from WEM and LGBTQIA+ perspectives. 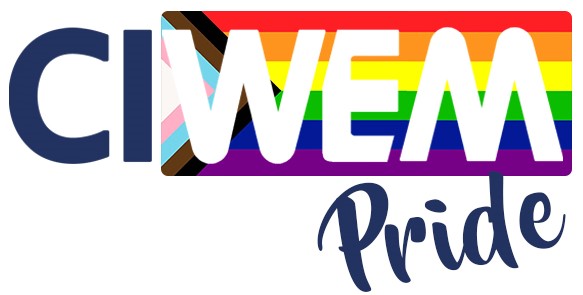 WEM Pride was co-founded by Dr Sarah Ward (Westcountry Rivers Trust) and Francesca Batchelor (CIWEM), following conversations with current CIWEM President Niki Roach, Jack Poole (former CIWEM colleague), and Jacquie Moon and Brendan Moore who co-founded Pride in Water Australia. So far, the WEM Pride Steering Committee has been established through liaison with CIWEM Branches - if you are a member of the WEM LGBTQIA+ community or an ally and would like to be on the steering committee to help shape how this initiative grows (Terms of Reference) please get in touch with Francesca at: governance@ciwem.org